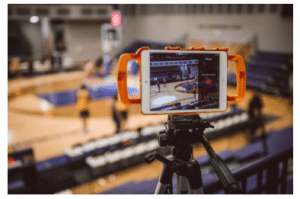 The pet phrase of English teachers everywhere might be annoying in its overuse, but the educators have a point. While it’s important to verbally explain something, being able to physically drive home the insight is much more effective. It’s scientifically proven.

But marathon video sessions aren’t necessarily the answer. Spend too much time in the film room and you risk losing your athletes’ attention, wasting everyone’s time. There is still value in video sessions, but, as Maryland coach Mark Turgeon preaches, they should be brief.

And by incorporating video into your practices, you stand a much greater chance of getting your message to stick.

Straight from the Film Room to the Court

If you want to drill home key points, reinforce your message by immediately implementing it after the players watch video. Let’s say your opponent runs a 1-3-1 zone. Show your team video of the zone, explain how you want to attack it, then get to the court and work on what you just talked about. The teaching points will be fresh in the players’ minds for better execution and a better chance at retaining the information.

If you have the resources, bring a TV or monitor down to the practice court. The shorter the delay between your teaching and the players actually practicing, the more they’ll remember and the better their performance will be.

It’s not necessary to cram all of your teaching into one video session. If you’re hitting on several points at once, the players might retain a few, but their minds are unlikely to comprehend everything you’re telling them.

So get up and move. Kevin Cullen, Director of Information Technology at Duke, said the Blue Devils will physically change locations between viewing video of themselves and that of an opponent.

“We’ll try to get them to get up and walk around,” Cullen said. “They’re mentally dividing two things, so we try to make that physical also, so they have a chance to clear their mind.”

Record the Practice Itself

Game video is the ultimate teacher – it depicts performance in the heat of battle when the results really matter. But there is great value in watching practice as well.

Let’s return to the 1-3-1 example from earlier. Go back and watch how your players practiced what you were trying to teach them. Did they find the right holes in the zone? Were they making passes to the correct locations? Did they space the floor correctly?

Go back and watch practice again and you’ll probably notice some things you missed in real time. If there is anything you need to clean up, you can show it to the players the next day and iron out the errors.

Recording practice also allows you to get a better sense of how hard your players are working. Texas coach Shaka Smart makes sure to note his team’s effort and body language even before getting into execution.

“You get a sense of, how hard are we running? What type of stance are we playing in? If you have the volume, you can tell how loud you are out there. Are we talking? Are we communicating? What’s our body language look like after plays and how closely are we connected after huddles? Those things are huge. Those are the building blocks of your program before you even get into Xs and Os.”

By incorporating video into your practices, your players will be more engaged, willing to learn and likely to remember the information. Get them familiar with Hudl and dominate this season.