This play is a pick and roll slip play 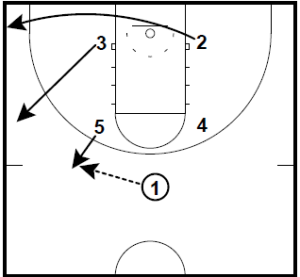 The 5 player will step out to get the pass from the 1 player. 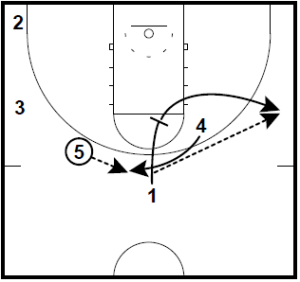 The 1 player will screen down for the 4 player.

The 4 player will pop out for the pass and then reverse the ball to the 1 player.

The 4 player will sprint over to set the screen and then execute a slip cut to the basket for the layup.

X4 is in a great position to defend the pick and roll but also in danger of getting beat on the slip. 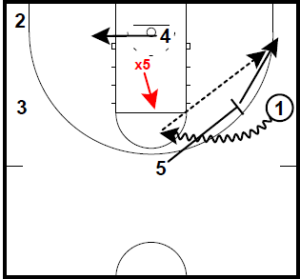 X5 is usually looking to help on the slip if they are aware.

The 5 player will sprint over to set the ball screen right behind the 4 player, which will usually
occupy X5.

If X5 does help on the slip, the 1 player should be able to come off the pick and roll clean for the jump shot.

X5 will be late to recover. X5 cannot help on the slip and cover the pick and roll at the same time.

X5 has to make a decision on what to cover!!