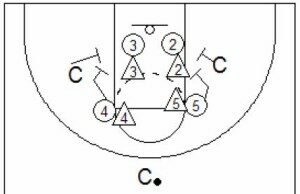 These defense and rebounding basketball drills used by Bob Huggins and Larry Shyatt are from Coach Scott Peterman of the Men’s Basketball Hoopscoop Coaching site. 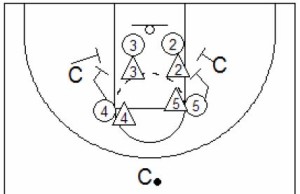 Defense has to get 4 stops to get out.

Really helps the defenders work on getting through screens.

This is a 5 on 4 drill. The 5 are on offense and try to score in the half court. When the 4 defenders finally get the ball, they will try to transition to score on the other end. They will have an immediate advantage because their center (a 5th player they now will have) will be stationed at the center court line. The offense has to get back, build a wall, keep the ball out of the middle, and force skip passes. Tell them to get their hands high and
their hips low.

When Coach Huggins plays 5 on 4, 5 on 4 they start with an unguarded offensive post player (who is live after the 1st pass). Defenders must help and recover, so the ball doesn’t get into the paint. Another way to play defense at a 5 on 4 disadvantage, leave the offensive point guard, unguarded to practice working on penetration and help and recover.

** if the offense gets a rebound here, you could give them 8 seconds to run a last-second play

You could change the drill to block out the closest man simulating a zone or blockouts out of a rotating or switching defense. 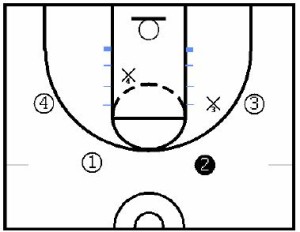 In any defense, zone or man, the person that you are supposed to block out will not be standing next to you.
This drill teaches you to find them, make contact and push them back. The defense blocks out and doesn’t go for the
ball until it touches the floor.

The defensive players have to block out someone that is not right next to them so they have to talk.

Offensive players are going straight to the rim. 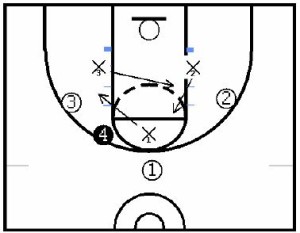 A coach or player can shoot the ball.

If you are interested in adding to your Coaching Toolbox take look at what I believe is our best offer.