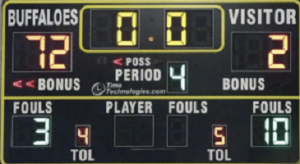 This article is republished with permission. The original article was written by Don Siko and appears at Reasonable Defensive Expectations – because there are no shutouts in basketball.

Finishing up some current thinking on charting individual player defensive accountability, we’d like to share one more thought on how coaches can use postgame defensive charting to zero in fixable issues:

In the sample defensive accountability spreadsheet we’ve used twice before, the team in question gave up 68 points and we assigned accountability to each point two different ways-by player and by the type of score (missed containments, closeouts, blockouts etc.).