This article was written by Don Sicko and republished with permission. The original article appears at Scouting Checklist: Inside the Scouting Report. 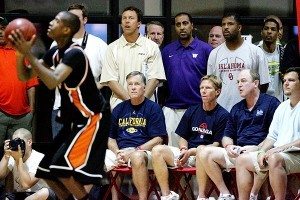 Obviously, there are as many different effective ways to scout an opponent, as there are effective coaches. Coaching philosophies, systems, personalities and styles can vary immensely. So, rather than dwell a great deal on the particulars of a report (personnel, sets, plays, defenses, presses, etc.), we’ll spend most of our time on what I’ll call, “Inside the Report”.

While video scouting has significantly changed how we scout to a large degree, the nuts and bolts of a scouting report have remained basically the same over the years. What video has afforded us is the opportunity to be more accurate because of our ability to review.

So, with that said, let’s go inside the report and ask ourselves more general questions about how we scout and how we intend to use that information.

ESSENCE OF A TEAM: More than anything else, I believe it’s important to be able to identify for yourself and your players the essence of your opponent. It might be a word or several words (tough, unflappable, hectic, fast, nuisance, smart etc.). It might be a phrase or a sentence- “their slow (or fast) tempo is their core;” “veteran laden team that tries not to beat itself.” Obviously a team can have a couple of essence descriptions but the simpler the better-for focus.

FOCUS: We ended the last sentence with this word and it goes hand in hand with the essence of a team. I think all too often a coach can get all wrapped up in the minutiae of a report and lose focus himself and transfer that on to his players. A good method to focus for both you and your players might be to ask yourself, “If I only could say 5 or 10 things about my opponent, what would they be?” You likely already do this on the pre-game blackboard at the end of the process. This way you might lead with it to get your players’ early focus.

IDENTIFY GO TO PLAYERS and ACTION: With this phase, you get even a little broader in your focus but you’re still pretty narrow in scope and your players-still have a manageable amount of info to process. Highlighting several key players and offensive and defensive actions will give your players a starting point. From there, you can briefly introduce the rest of the playing rotation. It’s after this phase that you can begin to lose younger, less experienced or less serious players. Everyone, up to this point, should be able to reasonably zero in on a team and retain.

CRUNCH TIME: This goes hand in hand with “go to” identification. Perhaps more important than what an opponent generally does is what they want to do when they have to. Teams usually fall back to a few tried and true tactics at crunch time.

HOW YOU “SPIN” YOUR OPPONENT: If you do start with an opponent’s essence, focus on 5-10 key attributes and discuss go to players and action, you’ve already begun evaluating and “spinning” them on behalf of your team. How you continue to spin them initially is likely to leave another lasting impression on your team. The last thing you want to do is to hype a very good team so much that your players think you fear them or gloss over a poor or mediocre team so much that you set your team up for an underachieving performance. We all know we have to “sell” not only our evaluation of the current team that we’re playing, but we also have to sell evaluations of every other team we have to play. Keeping evaluations consistent and even-handed relative to other evaluations is important for credibility.

SCOUTING SPECTRUMS: We’ve talked about spectrums a lot. Where are you on these spectrums? The only right answer is what works for you. Just ask yourself where you are and then if that’s where you want to be.

PERSONNEL or X’s and O’s: Do you concentrate on your opponent’s personnel or their stuff?

HARD COPY REPORTS or MEMORY: Do you have player scouting reports printed or not? If this step helps players better visualize your opponent, it may be worth the effort.

CLASSROOM WORK/VIDEO WORK or NOT: Do you preview your opponent prior to your first prep or any time prior to the actual game. Again, will this help your players once they get to the practice floor.

PUT IN SOMETHING NEW OR NOT: Based on your scouting report, would
you add something totally new-not just a tweak?

Will you cheat off certain players to shade or double others?

Are you totally committed to the philosophy of making your opponent’s best players beat you? (I personally hate it every time a lesser player scores when he gets a good look because I had my players cheat.

Based on your scouting report and your own team’s strengths and weaknesses, do you try to “take away” what they do (and to what extent) or do you try to “neutralize?

Do you ever discuss how you believe a game might be officiated based on those officials’ past tendencies?

Once you get to the practice floor, the next challenge is having your players accurately portray your opponent’s system. This is usually best done in a pre-practice time slot (if available). For some thoughts on using your scouting report to its fullest advantage you may also want to refer to “Practice Gimmicks to Better Simulate Game Conditions”.

What other things do you do to scout opponents and prepare your teams?