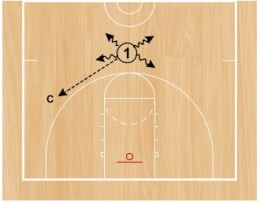 From an old Creighton Burns’ newsletter…

The skills of passing and catching on the move remain a significant area of deficiency and are areas that can be difficult to teach and drill.

The ability of guards and perimeter players to penetrate with their head up and make intelligent scoring or passing decisions is such an integral part of the game, yet often under-taught and rarely drilled.

This series of simple drills, involving 2 players and coach, provides some ideas for improving this area and expanding the skill package of perimeter players.

My hope is that you can take something away from this post to break down your offensive system into drills that will help your players. 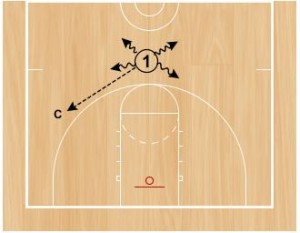 Player has the ball in the middle of the floor, coach on the wing

The player begins the drill by doing stationary crossovers dribbles. Player can move one step forward, back, or sideways but should stay in the area of the top of the key.

On the command of the coach, the athlete must make a firm, flat pass as quickly as possible to the coach.

Build up to making a one hand pass straight from the dribble to the pass, drill right and left hand. You can also vary the dribble move and use between the leg, behind the back, and other moves in place of a crossover. 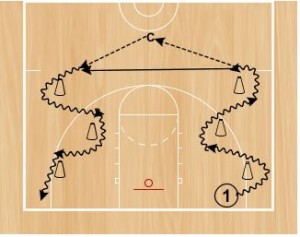 Player starts at the base-line and dribbles full speed through the circuit, executing crossovers at each cone

As the player gets to the last cone, make a firm, flat pace to the coach and sprint past to get the ball back

Dribble through the second circuit (full speed again) Emphasis on being quick from the dribble to the pass.

Time the drill to push the player to dribble full speed and also to measure improvement. 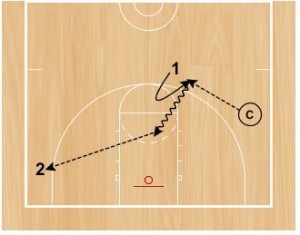 As the handler reaches the middle of the lane, make the pass quickly from the dribble to a stationary player in the corner

Drill with handler making firm, flat chest pass. Depending on your philosophy, you can build to one hand pass straight from the dribble

Once the handler can consistently find the stationary target with a flat pass, have the receiver now making a cut

Emphasis on having eyes on the rim on penetration, staying low and being quick from the dribble to the pass

Put the shooter on both sides.

Again, timing the drill to get 10 reps with no turnovers provides motivation and is helps to measure improvement. 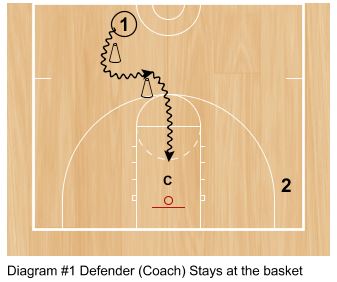 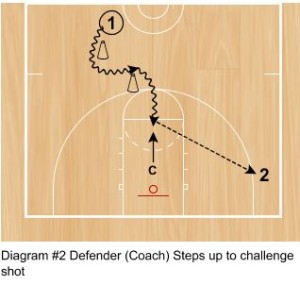 Guard beats the first cone, then turns the corner around the second cone

If the coach stays under the basket (Diagram #1), the guard pulls up for a shot or shoots a floater.

If the coach moves forward (Diagram #2), the guard kicks out for the shooter

With younger players, the coach can simply yell a “command” for the guard to react to 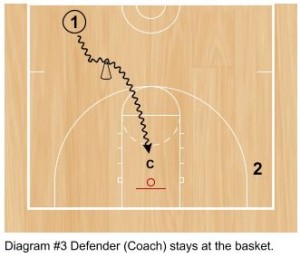 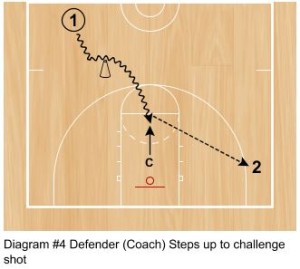 Similar to above, with the guard now beating the cone to the middle after a hesitation move off the “live” dribble

Again, the coach makes a movement to force the guard into a shot or pass decision OR the coach can yell a command 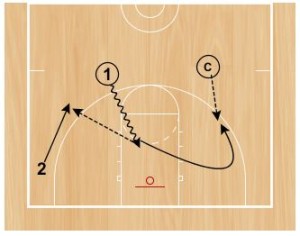 Guard penetrates middle and passes to shooter filling behind

After the pass, guard cuts to an open area to receive 2nd ball from coach for the catch and shoot

Emphasis on “what’s next?” – second efforts and continual movement