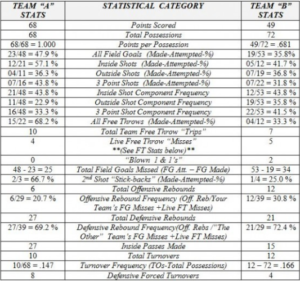 This article was originally written for Winning Hoops

An In-Depth Analysis of Old and New Statistics

Let’s suppose the following partial list of statistics are taken from the last game that your basketball team played. Team A won the game 68 – 49. What factors contributed to Team A’s win, but what other stats could be conceived somewhat of a negative to Team A—stats that tell you some phases of the game need to be corrected? What stats tell you that and what phases need to be worked on? Let’s analyze the stats and come up with some conclusions from the eyes of coaching staffs of both teams.

My first overall observance would be the “Points per Possession” (PPP) of both teams. This vital statistic evaluates the overall offensive and defensive performance of both teams. Team A scored on an average .681 points on every possession (which totaled 72). That calls for closer scrutiny of Team A’s offensive statistics. Offensively, I would look first for reasons for a low “PPP.” Most likely, the reasons are either because of poor shooting percentage(s) in field goals and/or free throws. I would not only look also at the number of turnovers but the “Turnover Frequency.” This statistic compares overall offensive turnovers with the total possessions an offensive team has in the entire game. Total Turnovers is a stat that can be misleading in that it doesn’t take into account the style and tempo that the offensive team employs. An offensive team that pushes the ball quickly in an up-tempo style of play will have more possessions in a game. The more possessions in a game, the more likely that more points will be scored as well as more turnovers may be committed. “Turnover Frequency” measures teams’ ballhandling skills and abilities on a level playing ground, regardless of whether that offensive team plays an up-tempo style or more of a slow-down tempo style.

Team A out-shot Team B in overall field goal percentage convincingly, so that should be a concern for Team B and therefore studied more closely. Team B’s poor field goal shooting percentage could be attributed to the numbers of types of shots taken and the “Component Frequencies.” 43.8 % of all shots for Team B were “Inside Shots” (shots that were taken inside the free throw lane) and that specific shooting percentage was not extremely high (41.7 %) Team B’s “3-Point Shot Component Frequency” was almost the most frequently taken shot and that actual shooting percentage was the lowest of all three types of shots (31.8 %). The “Outside Shot Component Frequency” was 35.8 % while the accuracy was only 36.8%. (Outside Shots are defined as any shots outside of the free throw lane but inside the three point line.) The overall analysis for Team B would be to work on all three types of shooting in practice and also maybe discuss better shot selection. Compared to losing team’s “Shot Analysis,” the winning team shot the ball much better “in the paint” as well as “behind the arc.” The winning team’s worst type of shot was also the shot that was used the least (22. % of all shots were “Outside Shots”) In my opinion, Team A won the game because of better shot selection and better overall shooting accuracy. Team A played to their shooting strength(s) and tried to avoid their shooting weakness (the mid-range shot). As far as turnovers, the discrepancy between “A’s” 10 turnovers and “B’s” 12 turnovers could at least be attributed to a possible more up-beat tempo (by studying and comparing both teams’ overall possessions for the game—68 and 72 possessions respectively. Team A’s “TO Frequency of .147 compared to Team B’s .166 is not a drastic advantage for Team A, but still an advantage for Team A. Team A should have had (slightly) fewer turnovers than Team B because of (slightly) fewer team possessions so neither team really gained an advantage because of “Turnover Frequency.”

The “Free Throw” phase of the game for Team B suffered greatly and also made a difference in the outcome of the game. Team B’s 33.3% was terrible and by missing the front end of the two “1 & 1’s”, they not only lost those 2 points but also the chance for two other free throws. Team A’s 68.2 % FT Percentage compared to Team B’s 33.3 % not only was more than twice as good, but allowed Team A to outscore Team B from the FT line 15 points to 4. If Team B doesn’t address the poor Free Throw shooting problem and instead complains about the “12 to 22 FT Attempt” discrepancy, they should examine the number of “FT Trips” for each team—not the number of Free Throws taken by each team. Again, when a team misses the front end of a “1 & 1,” they are surrendering the opportunity to shoot a second free throw. 10 to 7 in “Free Throw Trips” is not a huge discrepancy for Team B to complain about. This statistic may also indicate that Team A is more aggressive offensively by attacking the defense via of the dribble or by going inside more than Team B. This is proven by the discrepancy that Team A enjoys in overall “Inside Passes” (27-15) and overall “Inside Shots” (21-12). This may also indicate that Team B is a poorer “on the ball” and/or “post defensive team” than Team A is. The small discrepancy in the number of free throw trips could also have taken place with Team A having a lead late in the game that forced Team B to foul late in the game. 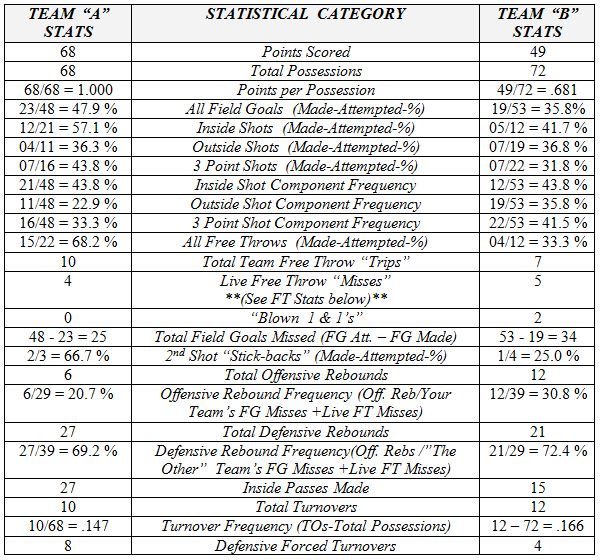 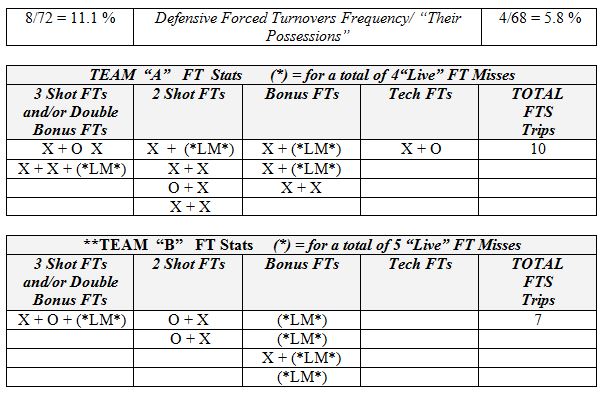 Sometimes a player does not appear to have obvious or outstanding contributions for his performance by using the standard game stats, but it just seems that every time that player is in the game; good things happen for his team. Trying to make this somewhat subjective evaluation an objective evaluation can be done by simply keeping track of when players enter and/or exit the games by monitoring the score and the actual time on the clock.  For instance, Duane Wade of Team A could come in the second quarter of the game with 6:12 on the clock and with Team A leading 20 to 19. When he went to the bench with 3:42 in the same quarter, his team was then leading 29 to 21. This small amount of data gives the player an example of his three various “margins per minute” now discussed.

His “Offensive Margin per Minute” for just this part of the game would be the nine points his team scored in the 2 ½ minutes of his specific playing time. This means that Duane’s team averaged 3.6 points per minute (9 pts divided by 2.5 minutes) in this specific part of the game.

In that same time span, Team A gave up only 2 points in the same 2 ½ minutes of this game. This makes the “Defensive Margin per Minute” for Duane a rating of .8 points allowed per minute played (2 divided by 2.5 minutes).

This is then calculated for the overall contribution per minute played. This number is then multiplied by 32 (32 minutes per game) to give a hypothetical number that would state what Duane’s team would have done if Duane would have played every second of this particular game.   Every segment of every player would have these three “margins per minute” accumulated to have three final statistics that can help tell how every player had contributed as a team member. Hypothetically on paper, Team A would have scored 115.2 points in the game, while allowing only 25.6 points to win by a huge margin of 89.6 points. Regardless of what the old fashioned statistics say of Duane’s performance, he was a part of that overall team contribution. As detailed as stats can be, some things cannot be measured on players’ individual performances.   These unique stats can help a coaching staff evaluate individual and overall team performances.

Taking the time to keep these unique statistics and then spending time and energy in evaluating them can not only give a coaching staff a clearer measuring stick for each player’s individual and overall team performance for each game. This might help players understand their value and their actual playing time which could help improve team chemistry and therefore the overall team’s performance. These statistics are worth the effort.