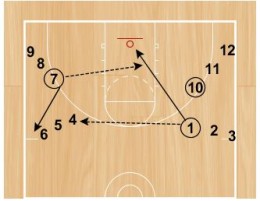 This is a passing drill that Coach Mike Neighbors used at the University of Washington.

That is why he called it “Dawg” passing.

He is now at Arkansas, so maybe it is “Hawg” passing now.

The first version is a diagram that includes layups and the second version is a passing and catching only version (You Tube Video).

Coach Neighbors has a newsletter that is the longest running one that I know of.

If you would like to be added to it, please let me know and I will pass along your email address to him.

This is a drill that is fast moving and requires communication. 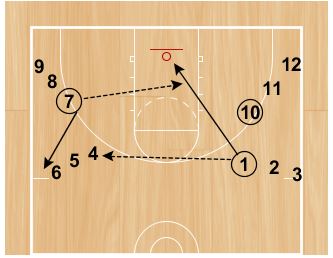 1 passes to the line directly across from her to player 4.

1 then cuts on diagonal to receive pass from front of bottom opposite line (player 7) which she takes in for a layup. 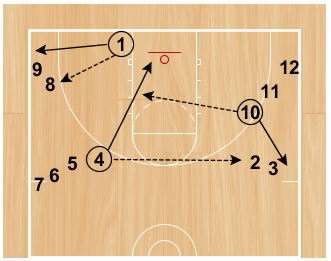 1 gets her own rebound, passes the ball to 8 (the same line that passed to her for the layup) and goes to back of line where pass came from–behind player 9.

The top basketball is now on the opposite side with player 4.

4 passes to 2, cuts to the basket, and receives a pass for a layup from 10

The drill now repeats itself from this side with the passes and cuts being the same.

You can make it competitive by timing to see how long you can go without bad passes, drops, or missed layups.

Or, you can split into two ends and set a time counting completed passes and made layups.

This is a You Tube video (without sound) of the above drill without shooting layups.