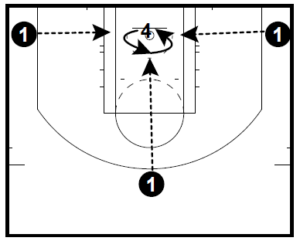 These two post play drills are from Coach Scott Peterman.

Both drills are overload drills.

In the second drill, the post player is working to score against two defenders.

Anytime you have an offensive player going against two defenders in practice, it is important to emphasize the purpose of the drill is making it tougher than a game.

This drill is from the NBA Skill Development Playbook which is a part of this week’s eBook bundle.
Click here for more information

The idea of this drill is to get as many shots as possible and practice scoring, never shooting the same shot twice in a row. 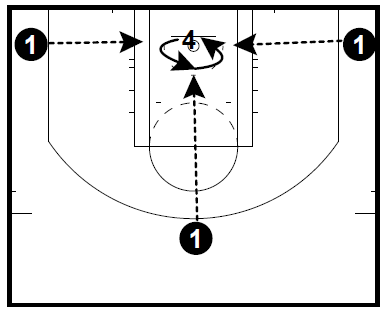 How it starts: Three passers (1), each have a ball.

The wing passers are low in the corner and one passer at the top of the key.

The post player will rebound makes and pass the ball out. It isn’t a post-up drill. We are just looking to score. 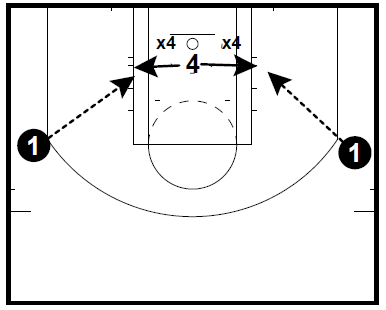 You play to 7. If you score then you go to the end of the line. You must stay in until you score or get fouled.

The game is about finishing, building toughness, and quickness. It makes them play quickly.

These two drills are from the NBA Skill Development Playbook that is a a part of an eBook bundle along with the NBA scoring drills Playbook. Click here for more information