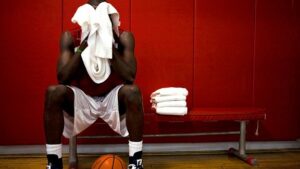 This post was written by Nick Bartlett and originally posted on the Dr . Dish Basketball Blog

While there are many hard workers out there, there are still many pet peeves of mine when it comes to basketball training. Admittedly, I committed many of these myself when I was a player. Now I cringe every time I see these mistakes from players today.

These mistakes are also committed many times during the season and in practice! Often times, basketball coaches are just as culpable as their players.

Avoid these mistakes and ALWAYS train with a purpose behind everything you do. That is what we we’re all about at Dr. Dish Basketball – whether you’re training with our machines or not!

Thankfully, Dr. Dish machines with our Skill Builder addresses many of these mistakes head-on! For pricing information, fill out this form.

1. Not having a goal

The best players know exactly what their goal is when they get to the gym. Whether it’s getting up 500 shots, 200 makes, or 15 minutes of purposeful ball-handling, great players have a goal before they go to work.

2. Not having a plan

Much like having a goal, always have a plan when you get into the gym. What are you specifically going to work on to get better today? Be able to answer that question before starting your workout. Always train with purpose.

Whether it’s having a coach, parent, teammate, or even yourself keep you accountable, it’s essential to push yourself to hit your goals and stick by your word. If you committed to making 500 shots a day and you only made 200 yesterday, you better make 800 today. That’s the mindset that separates good from great.

Never think you know everything. Listen to your coach and implement the suggestions he/she gives. I can’t stand players that don’t want to be coached or think they are smarter than their coach.

5. Not catching ready to shoot

Always catch shot-ready. It always makes me cringe to see players catch the ball standing straight up and down AND THEN start their shooting motion. You won’t have time to that in a game so don’t practice it that way!

6. Not diversifying your workout

Catch and shoot shots are great for warming up and getting into a good rhythm. And yes, it’s great if you can get up 500 shots in a workout. But, if they are all catch and shoot shots, you’re grooming yourself to be a one-dimensional player. Work on pull ups, finishing, and off-the-move shots as well. Game shots, game spots, game speed.

7. Not training at game speed

Again, taking rhythm shots is great for locking in your form, but I can’t stand watching players take a couple hundred shots and then calling it a workout. Train like you’re in the game under game-like conditions!

With the integrated Polar Heart-Rate monitor paired with Dr. Dish, you can now track player intensity!

8. Not training in an athletic stance

Much like training at game speed, everything you do should be in an athletic stance. It’s hard to watch players “attack” the basket while barely getting low or doing ball-handling drills standing straight up. Get used to playing low and in a stance.

9. Being afraid to make mistakes

10. Taking no warm up shots

One of my biggest pet peeves is watching players step on the court, grab a ball, and immediately start jacking up long 3 pointers. Work your way out there. Even the best players in the world start right under the basket and gradually work their way back.

It’s always frustrating watching players work on things that don’t apply to their game. This could be a post player working on his 25 foot jumper when 80% of his shots in a game are from the paint or a point guard working on his hook shot down low.

12. Spending significant time working on dunking (or trying to dunk)

I’m all for working on finishing moves, but time spent trying to dunk could be used working on valuable skill development. Don’t be the player who can throw down sick dunks but has no jumpshot, handles, or relevant basketball skill.

13. Focusing on time in the gym instead of purpose and quality

One of my biggest pet peeves is listening to players talk about how they spent HOURS in the gym working out. This tells me they spent a majority of it NOT working out. Focus on training with purpose. Get in, put in the work, and get out.

One of the biggest reasons many players spend so much time on the court is because they’re busy “Tweeting” or “Instagraming” their workout to prove they’re working hard. I’m all for a quick post, but I can’t stand players doing a quick drill and immediately going to their phone for 15 minutes before starting the next drill. Everyone will know what kind of a worker you are when you prove it on the court during game-time.

How will you know if you’re improving if you don’t track your progress? Establish your goals with your workout and specific drills and then push yourself to reach them. You will see the progress you’re making which will then motivate you even more.

One great workout to begin the week is a good start. But in order to see serious improvement, you have to develop consistency. Make sure you’re doing something every day to make yourself better than yesterday. 1% better every day.

17. Not pushing to fatigue factor

This is probably my #1 pet peeve when it comes to basketball training. Players that spend a half hour shooting around casually with no purpose and no routine don’t get better. In many cases they actually develop bad habits and can actually become worse. You can always focus on these 3 C’s when shooting to avoid casual shooting.

19. Only working hard when others are watching

The best players don’t need a coach or parent watching for them to work hard. I never understood why players would turn on an extra gear only whenever a coach was watching. Even if you have to pretend Coach K is in the gym with you every time, give 100% regardless if anyone is there or not.

20. Quitting when things get tough

I’ve been there. Some days just don’t go your way. You’re tired, your jumpshot isn’t falling, your handles aren’t nearly as tight as they usually are. If your solution is just to pack it up for the day, how do you expect to improve? When things get tough, true competitors push themselves even more and NEVER quit.

Make sure you’re aware of these 20 basketball training mistakes. Each one of these is committed every day and many times players have no idea they are doing anything wrong. Don’t take the easy way out. Train with purpose and focus on efficiency!

Ready to upgrade your training equipment? See why a Hall of Fame Coach chooses Dr. Dish!

Why a Hall of Famer Chooses Dr. Dish