These characteristics of coaches of excellence were posted on Bob Starkey’s Basketball Coaching Blog, hoopthoughts.blogspot.com.

Editors’ note from Brian: Even though these concepts came from a very successful NFL executive, most of the thoughts can be applied to any level of coaching for any sport. Also, the article is written with male references, but in my opinion, my of the lessons can be applied to man and women, boys and girls.

Bill Polian is one of NFL’s best General Managers.  He has a proven formula of success and that has transcended from one organization to the next.  Hired as the Buffalo Bills GM following a 2-14 season, he soon had the franchise going to three straight Super Bowls.  From there he became the GM of the Carolina Panthers where he had the team in the NFC Championship Game in only their second year of existence.  From there he took over the Colts organization and one of his first moves was to draft Peyton Manning who would ultimately guide the team to a Super Bowl Championship.

Each spring I’m honored to be a part of Felicia Hall Allen’s A Step Up Assistant Coaching Symposium,”which is a unique format to help assistant coaches become better at their craft.  Obviously, one of the topics each year is moving  into the head coaching position.  Felicia brings in a wide variety of people to help paint the picture they need to move up.  One of the obvious speaker choices new head coaches that have just made the jump.  But she also brings in Athletic Directors, Search Firms and Head Hunters to give us a unique look at what the people doing the hiring are looking for.

I think sometimes as coaches we tend to lean on other coaches maybe too much for information instead of stepping outside our comfort zone and meeting with the true “decision makers.”  Have you met with your Athletic Director and discussed what he/she looks for in a candidate?  Do you have the courage to ask that AD what your deficiencies are and what you should look for?

Polion has an outstanding book that I’ve read a couple of times titled “The Game Plan: The Art of Building a Winning Football Team.”  For those interested in becoming a head coach, Chapter 2: Deciding on the Decision Maker is worth the price of the book alone as Polion gives great insight to what he is looking for.  Below, is a brief look in to what he views important.

Today, every coaching candidate shows up for an interview with a “book” detailing all aspects of his program.  But the book is only as good as the person reading it.

Can he sell his program to all of the team’s stakeholders?  Does he care and communicate that care to others or are they just numbers to him?

Can he teach or is he a lecturer?  A teacher gets everyone involved.  He is able to illustrate his lessons with real-life examples and sometimes funny parables.  He gets his students invested and involved in what he’s teaching.  A lecturer just stands at the podium and spits out notes.

Is he coherent in his remarks to the players, staff, ownership, and the press after a loss?  Does a loss stay with him too long?  Can he keep everyone in the program, including the general manager focused by his own leadership when the “roof is falling down?”

As Marv Levy always used to say, “If we’re penalized for having 12 men on the field, that’s my responsibility.

Secondly, can he be flexible and take advantage of circumstances or does he buy someone else’s program, lock, stock and barrel?  I other words, does he say, “Oh, gee, Pittsburgh won using a 3-4; let’s switch to a 3-4?”

If interested in finding out more about the book, you can click the image of the cover below to the left. 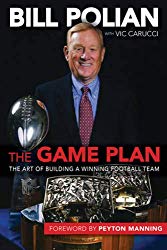 Is his approach to discipline fair?  Do his personal bearing, conduct, and dignity — which encompasses work ethic, temperament, personal habits, etc. — generate respect from the players?  Not liking, but respect.