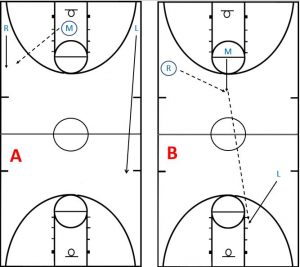 This drill is from the Xavier Men’s Program Basketball Coaching Newsletter.

You can see the archives of their basketball coaching newsletter at this link: Xavier Newsletter

Editor’s Note from Brian. A lot of teams run a drill similar to this, but the idea behind this post is to set the expectation of perfection, no bobbles, bad passes, missed layups, etc… when you are doing warm up or technique drills.

1. The drill begins by your team forming one line along a baseline. The line has two balls in it. The following progression takes place:

d. “Michigan”- Three players are standing along the baseline. The middle player passes to the player on his right side. The right player passes the ball back, the player on the left side runs wide to the basket and prepares for a pass from the middle. No dribble is allowed. A lay up is shot. Right and left cross as the middle player rebounds. Middle then passes the ball to left because he shot the layup. Repeat on way back. (see diagram #4)

f. “Three man weave with jump shot”- Instead of a layup, a ten foot pull up is shot. A dribble by the shooter is permitted. 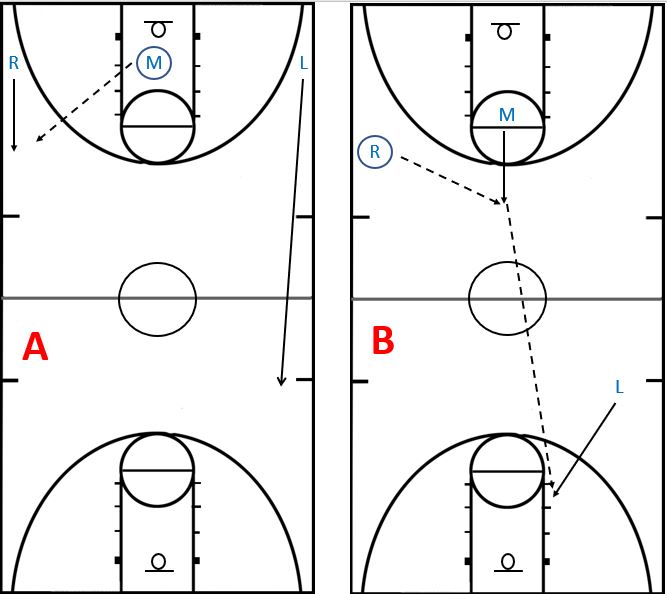 Rules
Any travel, bobbled pass, turnover pass or missed shot (exception for F) the group or player must go again until perfection takes place. Every player on the team goes once each on A, B, and twice each on C-F segments of perfection.

Diagram A: The M player passes to the R player. The L player runs wide and at an angle to the basket.

Diagram B: The M player receives a pass back from R and delivers a pass to L on the run so that L doesn’t have to dribble. 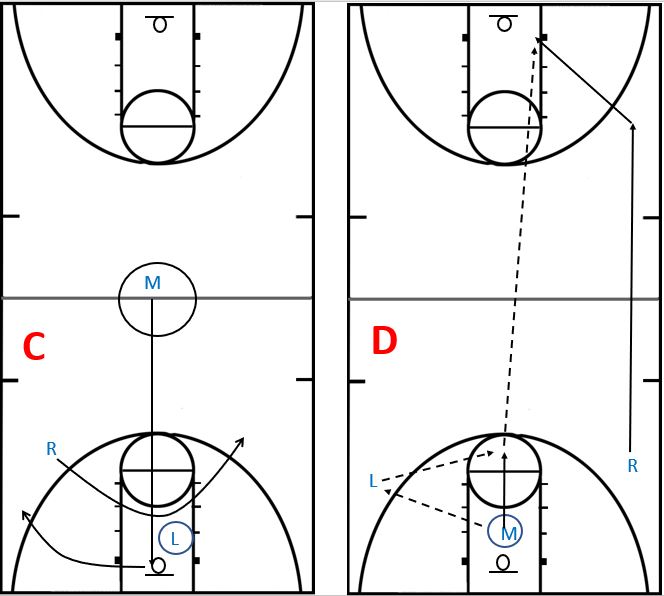 Diagram C: The L player shoots the lay up and crosses with R to return back to the original end. M rebounds the ball.

Diagram D: M passes to the L player – because L shot the layup. L return passes to M and M delivers a 3/4 court pass to R in stride for the groups second layup.