This post was submitted by Coach Tom Kelsey.  Coach Kelsey has been a Head Coach at Belhaven University, Faulkner University, and Greater Atlanta Christian High School.  He has also been an assistant at LSU, Alabama, Murray State, and Lipscomb.  He played at Lipscomb under Coach Don Meyer.

Use this basketball drill to cover key areas for your team.

I like to use drills which combine areas of the game which will help us improve.

The Laker Outlet Drill works on blocking out, handling the basketball, getting open, feeding the post, hitting the open man, setting screens, on the ball defense, denying the pass and post defense.

The important part of anything combination drill is not to lose focus on any area. Each technique is emphasized. As with any basketball drill you want to concentrate on the technique. Don’t do drill for the sake of doing the drill. Work on the small details.

Laker Outlet forces players to concentrate and each move is critical. I like this also because it makes players work in a confined area of the court. Do not allow lobs to be thrown. Make offense work to receive each pass. Players also have to be solid with the ball on each catch, utilizing pivots to create space.

To begin work with, no defense.

Coach or player can throw the ball off the backboard and players will work on the block out position and technique. Start with designated offense and defense. Later once they understand the drill, you can make it competitive and whoever gets the ball off the rebound is offense.

Once rebound is secured, the wing will v-cut to get open for the outlet pass. Working on technique of getting open: Quick v cut, pushing off outside foot, changing speed and direction.

Player on top will now work on getting open. Same techniques as before with the wing.

Once player receives the ball up top, wing must v-cut again to get open.

Wing now dribbles down to feed the post player.

Post player will work on technique of catching the ball. 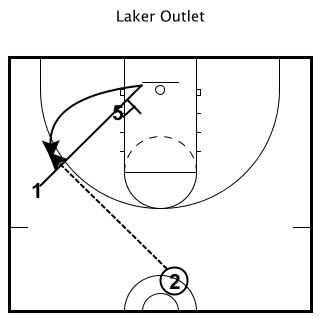 Add screening for another option. Guard up top looks for wing coming off the screen from the post player. Working on setting and using screens.

Now add in the defense. Working on technique for denying passes, guarding the dribble and fronting the post. 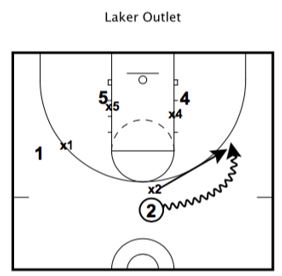 Another option guard on top once receiving the ball dribbles away from where the pass came and looks to feed the post.

To make it competitive divide into teams and play to a predetermined score.

Guards are not allowed to make a move to get open until passer has the ball. The wing cannot move to receive outlet until teammate has the rebound.

Guard on top cannot make a move to get open until wing has the ball. The creates more emphasis on working to get open.