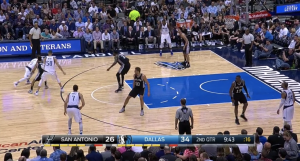 His YouTube channel has several videos with various types of man-to-man plays, zone sets, and inbounds plays. You can subscribe to receive an update when he posts a new video Zak Boisvert You Tube Channel

Embedded below is a video I put together exploring the NBA defensive concept of “Veer-Backs.” Through the first 5 days of the playoffs, you’re seeing a ton of these teams executing veer-backs on a lot of middle pick & rolls.

Make sure that your sound is on and that you are connected to a server that gives you access to YouTube Videos.

The first few clips are using a Veer back

I have also posted some notes below the video from as well as some links to other resources from Pikandpop.net from NBA coaches on defending pick and roll. 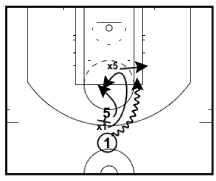 -As soon as the guard hears the “Flat” call by his teammate, he presses into the ball-handler and directs him towards the screen and then he chases the ball over the top of the screen. 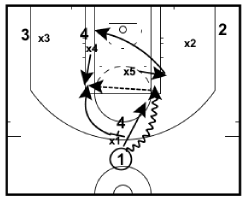 -Veerback: If the ball-handler gets too deep and attacks the big, the guard calls “Veerback” to tell the big (x5) that there’s a switch. X5 will keep 1 in front while x1 veers back and drives his butt into 5 on his roll.

-Big-to-big communication is so vital. They’re playing defense together.