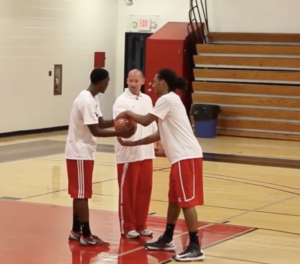 Coach Jamy Bechler’s teams have consistently been among the nation’s elite when it comes to rebounding, including 2014 when his team set a national record for having a +19.9 rebound margin.

Coach Bechler has coached at the NCAA Division I, II, III and NAIA levels, as well as both men and women during his coaching career.

Toughness & desire are the common traits of a great rebounder; however, Coach Bechler teaches that there is skill and techniques involved.  Here are three drills from his rebounding library that can help you create elite rebounders.

Coach Bechler explains that “Hustle” is a major ingredient to Offensive Rebounding.

The Halfcourt Hustle drill is designed to get the rebound and score as fast as possible.

The rebounder cannot leave half-court until the ball leaves the shooter’s hands. This will create a more game-like situation.

During the drill, the whole team should be yelling “rebound” so everyone on the court knows that a shot was taken.

Coach Bechler’s Hit and Get drill is designed to make contact with the offense using the forearm and then retrieving the ball.

The drill is designed with three offensive players with a pad on the perimeter. The three defenders are lined up with each one of the pads.

After hitting, the player turns and sprints toward the rebound exploding off the ground ready to catch with two hands.

Tug of War is a one on one toughness drill where you see who wants the ball the most.

The drill is designed to simulate fighting over a loose ball, rebound, or a jump ball.

The rules of the Tug of War drill is a coach holds the ball and each player has a hand on the ball.
As soon as the coach releases the ball the two players compete for the basketball.
The loser of the Tug of War has a punishment at the end of the drill.

Thank you to Coach Bechler for sharing these three drills.

If you’re looking for more ways to become a better rebounder please see more courses below: