I hope you might get a couple ideas to help teach and evaluate your individual defensive players. These ideas can be used whether you’re a man-to-man coach or a zone coach.

Still completions for level one defenders

Every time there is one closeout, there should be 4 others.
The help behind the closeout is critical

On correcting mismatches or rotations—defense must find and cover the open player before the offense does. 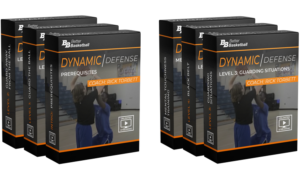