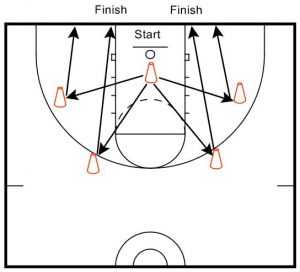 Below are 3 really effective agility drills that emphasize Defensive movements.

When doing these drills emphasize with your athletes to stay low in defensive stance and to explode from cone to cone.

I would recommend doing these drills prior to any traditional conditioning drills (i.e. lane drills, 17’s, conditioning ladders etc.)

Defensive Close out Drill– Start in the middle of the lane and closeout to cone #1 and slide to baseline.

Reset in the middle of the lane and proceed to Cones #2-4. 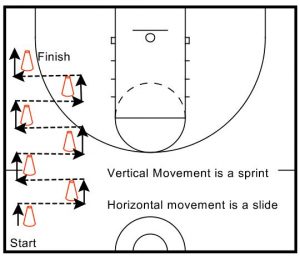 Cone Defensive Slides– Start by sliding to the first cone, advance forward then slide to the next cone.

Repeat until the course is finished. 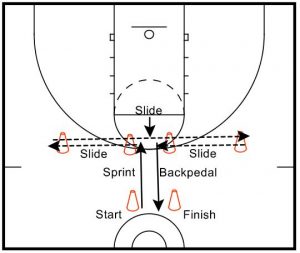 Finish with a backpedal to the finish cone.