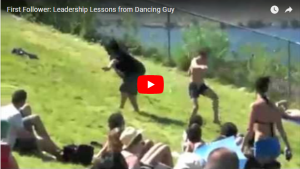 Stephanie started a petition to encourage the NCAA to keep the Division I, II and III women’s games in the same city. Here is the link if you are interested: Petition

The Lynchpin to Team Cohesion

Player leadership is crucial to creating a winning team culture.  You long to have a few players on the team with the courage to step up and lead on the court or field and in the locker room.

But there’s another role that is equally important to team cohesion and creating a solid team culture.

In the video below, Derek Sivers calls this person the “first follower.” Check out the fascinating video about how to start a movement in under 3 minutes, then look over the key points and finally, see how this relates to you and your team.

As outlined in the video:

The reason so many of you tell me that you don’t have leaders on your team is that most young people don’t have the courage to “stand alone and look ridiculous.” Players may say they want to be leaders, but finding ones who will actually hold teammates accountable and defend the culture seems daunting.

BUT, it may be easier if they had the certainty of a first follower. If they knew that a teammate would follow well and show the rest of the team how, it may be easier to muster up the courage to step up and lead.

One of the things I loved about our team handbook at Penn State was the page about how to be a good follower.

We talk so much about leadership, but sometimes fail to mention the importance of learning how to follow. [Tweet That!]

You probably have identified players that you are helping to develop leadership skills.

Who are you looking to to fulfill the first follower role? Identify that player, make sure she knows the crucial nature of the role, then help her to embrace and fulfill it with excellence.

The Lynchpin to Team Cohesion appeared first on Life Beyond Sport.