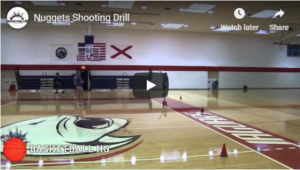 This video is one of the great resources available from basketballhq. They have several more videos as well as basketball coaching resource articles.

This drill is a good “gut-buster” to use at the end of a shooting workout. It is physically demanding. It also forces players to shoot under the pressure of making three in a row. Having to make consecutive shots to complete a drill is one of the best ways to put mental pressure on a shooter.

Matthew Graves is the Former Head Men’s Coach at South Alabama. He was an Assistant to Brad Stevens and a player at Butler prior to taking the job at South Alabama. Coach Graves was the top assistant for both Championship game runs that Butler made in 2010 and 2011. He is currently serving as an assistant at Xavier.

Depending on the needs of your program, you could shoot closer shots or require only two consecutive makes then build up to three consecutive made three point shots.