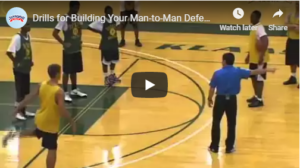 The video is a You Tube video so make sure that you are on a server that allows You Tube access.

If you are not, I have a link to be able to watch the video on the Championship Productions site.

I have also listed some other defensive conversion drills at the end of the post.

You can also see other basketball defensive drills that are a part of our site at this link: Basketball Defensive Drills Site

I like to use this drill to simulate and practice converting to defense when we commit live ball turnovers, which in my opinion are more difficult to defend than a missed shot.

You can run this defensive change drill either half court or full court.

If you run it as a half court drill, it forces the offense to adjust to defense more quickly. If you run it as one of your full court defensive drills, it is more game-like in terms of the angles and distances that your players will need to use to convert to defense when they turn the ball over.

I like to run the drill with a coach calling “Change!” rather than having the coach blow the whistle. We want our players to play as hard as they possibly can until the whistle blows, so I don’t ever like to use the whistle to do anything in practice other than to stop the action.

Here is the basic setup to run these 2 basketball defensive drills.

If you are running the drill half court: Offense, runs their regular offense and attempts to score. I think it is best to develop a scoring system so that the offense is intense in their execution of screens, cuts, passes, catches, and all other fundamentals. We have a scoring system for all of the drills that we run. If they know that they are not being scored and that the drill is not competitive, their natural human tendency will be to relax.

We keep score for the drill just like we keep score in a game, 3s, 2s, and free throws. We have one of our assistants keep track and make sure that both teams have an equal opportunity to take shots before we yell “Change”

One team is on offense and one team is on defense. When “Change!” is called, the player with the basketball puts the ball down on the spot they are on on the floor. You have to set that rule for both of these basketball defensive drills site or players will roll the ball away from their opponents to gain an advantage. When that happens, we give the other team 2 points. (You could deduct 2 points from the team committing the rules violation of rolling the basketball, but that gets difficult for the scorekeeper to keep track of.)

On the “Change!” command, the defense becomes the offense and the offense becomes the defense. However, the new defensive team must all guard a different player than was guarding them. This rule in the drill forces them to talk to each other to get this accomplished. It creates confusion, just like there is in a game when they turn the ball over. As a matter of fact, when they get frustrated by the confusion, it is a good time to teach them that they can cut down on that in a game by taking care of the basketball and not turning it over. Another important teaching point is that in a scramble situation, the first two things that must happen are that someone needs to take the basketball and someone needs to get to the basket to protect it. After those two items are covered, the final job is to match up with the remaining players.

The full court version of these two basketball defensive drills is run the same as the half court, with the two differences being that the team going from offense to defense is not required to guard a different player than the one guarding them and that the team transitioning from defense to offense goes to the basket at the opposite end of the floor rather than trying to score at the basket that they were just defending.

If you are interested in purchasing this or any other Championship DVD, you can use this link:

Make sure your sound is on.

Below are more links to other basketball defensive drills sites that are posted on the Coaching Toolbox: