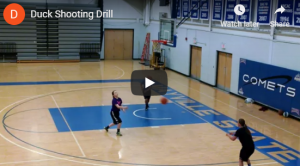 Coach Hutter’s comments on the drill:

We picked this drill up from the coaches at the University of Oregon Women’s Basketball Program. This is a great shooting and competition drill for your players.

Because we are a transition team, we like to use drills that involve a lot of sprinting and shooting off of the sprint, like we would in transition. With “W” shooting, we use the same seven spots as we use in “Duck Shooting” (Corner, Wing, Pro Spot, Top of Key, Opposite Pro Spot, Opposite Wing, Opposite Corner). The shooter will start in the corner. Shooter will shoot and then run and touch the half line and then advance to the next spot. Shooter will shoot a total of seven shots. Goal is for shooter to make five or more shots in 40 seconds or less.

-Quality of the jump shot comes from the feet:
-Quality = how open you are, low quality = high contested shot attempt
-“Shot first” mentality on all catches – Be an offensive threat with the ball
-Great balance on all catches, before the shot
-Balance starts with a great base of support with the feet and low center of gravity
-2 biggest keys in shooting for us is: “Get the ball up” & “Get the ball straight”
-Analyze your misses – don’t miss two shots in a row – THE SAME WAY
-NSM = Next Shot Mentality
-4 Points in the shooting technique need to start and finish in a straight line
-Shooting foot
-Shooting knee
-Elbow
-Hand/Follow Thru

-Proper consistent technique will bring about consistent results
-We want consistent shooters and that starts with having consistent technique
-Proper shooting technique starts with the feet and builds up from there
-NO FEET = NO SHOT
-You are the most open you will be when you first catch the ball
-so get ALL of your work done before you receive the ball
-Catch and shoot the ball in rhythm
-Shooting is a rhythm skill – like swinging a baseball bat – no hitches, no pauses – JUST FLUID
-Shooting the ball is one upward FLUID motion – Rhythm
-Hold a high one second follow thru on every shot
-We want quiet/quick feet on all catches – Stay light on your feet
-Make your workouts like games, so your games can be like your workouts – DEVELOP GOOD HABITS
-Every pass should hit the shooter in the hands and lead to a rhythm jump shot for us

-Never miss two shots in a row the same way
-Clean makes to end a drill
-makes the shooter concentrate more when they are most fatigued to complete the drill
-Use drills that involve making 2 and 3 in row – makes shooters have to focus on consistent technique
-Chart shots in individual workouts – allows players to see improvement
-also creates motivation to improve when they see improvement
-also creates competitiveness within players to achieve higher score than previous workout
-Chart shots as a team during practice and team shooting workouts – makes players focus on team more
-every shot from every player within every drill COUNTS towards team’s success
-Make shooting drills competitive during practice – Have team compete against the game as one team
-add time and score to drills to have team compete against the game
-will also make you a better passing team
-Have individual shot charts for players during practice and games, instead of team shot charts
-Categorize your shots so you can see who and how your players are getting shots