I have always felt that the four areas that a coach can affect with players in their basketball and that players should concentrate on improving are:

IMO, one of the skills involved in mental toughness is not making excuses. I have assembled some quotes in this article that I hope will help as you work with your players to develop and improve their mental toughness.

Excuses are the nails used to build a house of failure. ~Don Wilder and Bill Rechin

Several excuses are always less convincing than one. ~Aldous Huxley

Maybe you don’t like your job, maybe you didn’t get enough sleep, well nobody likes their job, nobody got enough sleep. Maybe you just had the worst day of your life, but you know, there’s no escape, there’s no excuse, so just suck up and be nice. ~Ani Difranco

How strange to use “You only live once” as an excuse to throw it away. ~Bill Copeland

Don’t do what you’ll have to find an excuse for. ~Proverb

No one ever excused his way to success. ~Dave Del Dotto

Excuses are the tools with which persons with no purpose in view build for themselves great monuments of nothing. ~Steven Grayhm

And oftentimes excusing of a fault. Doth make the fault the worse by the excuse. ~William Shakespeare

A lie is an excuse guarded. ~Jonathan Swift

Hold yourself responsible for a higher standard than anyone else expects of you. Never excuse yourself. ~Henry Ward Beecher

Whoever wants to be a judge of human nature should study people’s excuses. ~Hebbel 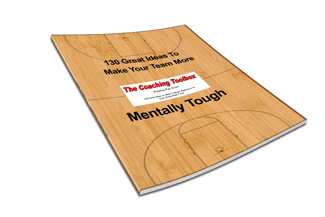 “This is great information that will help any coach to make their team more mentally tough and focused. I found sections 6 and 7 to be helpful to me as well as to our team. “

There is no such thing as a list of reasons. There is either one sufficient reason or a list of excuses. ~Robert Brault,

We have more ability than will power, and it is often an excuse to ourselves that we imagine that things are impossible. ~François de la Rochefoucauld

Pessimism is an excuse for not trying and a guarantee to a personal failure. ~Bill Clinton

I attribute my success to this: I never gave or took an excuse. ~Florence Nightingale

We are all manufacturers – some make good, others make trouble, and still others make excuses. ~Author Unknown

One of the most important tasks of a manager is to eliminate his people’s excuses for failure. ~Robert Townsend

Success is a tale of obstacles overcome, and for every obstacle overcome, an excuse not used. ~Robert Brault

An excuse is a skin of a reason stuffed with a lie. ~Billy Sunday

He that is good for making excuses is seldom good for anything else. ~Benjamin Franklin

It is wise to direct your anger towards problems – not people, to focus your energies on answers – not excuses. ~William Arthur Ward

It is better to offer no excuse than a bad one. ~George Washington

We have forty million reasons for failure, but not a single excuse. ~Rudyard Kipling

The person who really wants to do something finds a way; the other person finds an excuse. ~Author Unknown

If you always make excuses to not follow through you deserve the weight of anxiety on your chest. ~Author Unknown

A man can fail many times, but he isn’t a failure until he begins to blame somebody else. ~John Burroughs

The best day of your life is the one on which you decide your life is your own. No apologies or excuses. No one to lean on, rely on, or blame. The gift is yours – it is an amazing journey – and you alone are responsible for the quality of it. This is the day your life really begins. ~Bob Moawa

Never ruin an apology with an excuse. ~Kimberly Johnson