This drill is from an old Weber State Mens Basketball Coaching Newsletter.

It was put together by then Weber State Assistant Coach Phil Beckner. Since then, Coach Beckner has held assistant coaching positions in the D League, with Nebraska, and now at Boise State.

Coach Beckner is currently on the staff at Boise State.

The License is an out of season shooting workout we use to challenge our guys and get them extra shots.

The players must score a 35 or better 5 times in order to get The License. Each shot made is one point.

Only players with The License are allowed to shoot three’s during the season.

You can adapt it to fit the level that you coach and the skill levels of your players.

These standards are for a Divison I men’s program where 2013 unanimous choice NBA Rookie of the Year Damian Lillard played.

I would start anywhere from 28 to 30 for high schools and modify your standards as you see how your team stacks up. 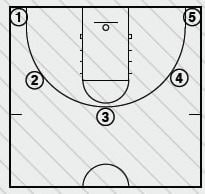 Round 1 Spot Ups: Player will start at spot 1 and move around the arc and back to shoot a total of 10 shots.

*Player is allowed to start the drill by making his first shot.

Only from spot 1 and only on this first set of 10 shots. 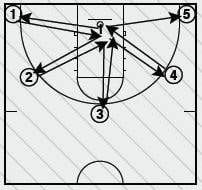 Player will start under the basket and make a cut into spot 1 to shoot.

Player then cuts back under the basket end then to spot 2.

This is repeated for aU 5 spots, then the player will repeat the cuts starting at spot 5.10 shots total. 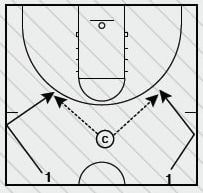 Player will start at 1/2 Court and make a cut into the wing.

Coach is in the middle to pass.

Player will start at halt court and shoot a trail 3 at the top of the key. Coach will pass from the side. Player shoots 5 from the right and 5 from the left. 10 Shots total. 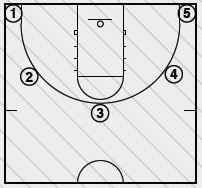 Same as Round 1 but the player does NOT start on make from spot. 10 Shots total.