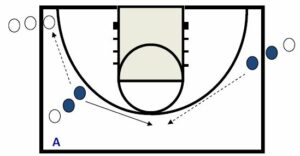 This shooting drill came from the University of Washington Women’s Newsletter.

If you would like to subscribe, email me and I will forward your interest on to their staff.

This is what Assistant Coach Mike Neighbors said about the drill:

“Team shooting drill we did a number of times during the break and our team really likes it. Rare shooting drill that also forces them to pass, rebound, and communicate effectively. See if you can beat our records.”

Competitive Team Shooting Drill that takes about 8 minutes to complete. 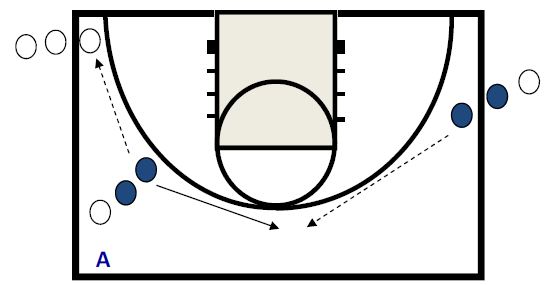 Begin drill with 4 balls. 2 balls in each of the lines shown above and one line without balls.

The middle line passes to the corner. The player in the corner attempts a 2 or a 3.

The pattern continues to repeat itself for 1:00.

Quick rebounding and communication on rotations is key to keep the drill flowing and insure maximum possible attempts in the 1:00.

Tell your players that when they shoot it, they always rebound their own make/miss. They must then rotate to the proper line. Let them figure it out on their own.

This is part of the drill. Hopefully in time they will learn to follow the person that starts in front of them and the more you do the drill the more ways they will figure out to get more shots.

There will be some frustrating moments for you as the coach and for them too. But resist the urge to “tell them” how to rotate.

Them communicating and experimenting is part of the battle. 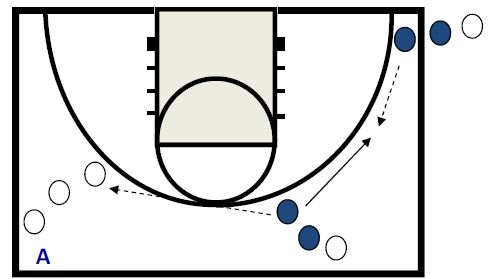 For the next 1:00 we simply move the lines to new spots so that we can shoot the two wing shots.

Scoring is the same. Rotations are the same.

Don’t be surprised though when simply moving the lines cause rotation issues. I can’t explain it, but it happens to every team we use it with. 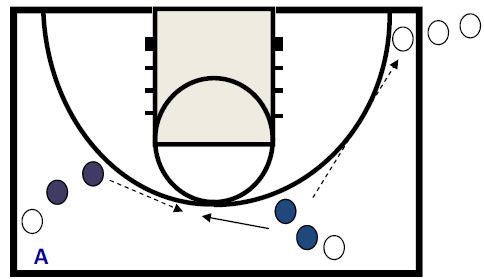 For the third minute, you only need to move balls from the corner to the wing. Now you get shots in the corner and the back at the top again.

Once again scoring is the same. 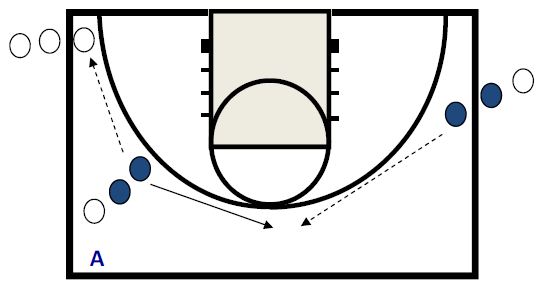 For minute 4, 5, and 6 all we do is switch ends of the court. Too many teams only utilize one end of the court so this gets us equally number of shots on both ends.

For scoring purposes, we chart individual spot scores while also calculating an overall 6:00 total score. We use this score to measure ourselves and challenge ourselves to reach new goals as the season progresses.

If you have a large team it is possible to do it simultaneously on both ends with the switch after 3:00 minutes of shooting.

We keep a board with our Top 10 scores on them and bring to practice on the days we use this drill. Players love to compete against themselves and your former teams.

This year we have been challenging other teams. I have shared the drill with some coaching buddies and they use it with their team. Tell you team some “other” team got a certain score and just watch them compete to beat it!!!

The more you do the drill, cut down the time in between spot and end rotations.