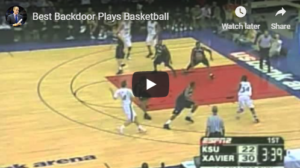 Army Assistant Men’s Basketball Coach Zak Boisvert has put together some short clips of 7 backdoor plays. Each play is shown at least twice and a couple of them have two variations.

The point is not a “highlight” tape, but the movements to get shots.

Several of the teams miss the shots in the video of the set they are running.

Also, some of the clips are a few years old. The idea is if the actions have merit and you can incorporate a few in your offensive attack, or it gets you to think about ways you can get a couple of backdoor baskets per game, I believe it is worth the time to watch.

Coach Boisvert has posted several videos of some of the better schemes he has seen. His YouTube channel is: Zac Boisvert YouTube Channel If you are interested in subscribing.

He also is also very active on Twitter: @ZacBoisvert

Here are 7 different man to man backdoor plays. Most are shown more than once. Some have sound and some do not. I hope you can find one or two that fit your basketball program.