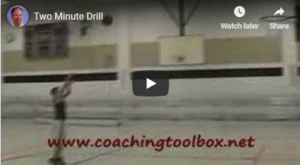 The Two Minute Drill is one of our favorite basketball shooting drills and develops:

Basketball players are highly competitive people by nature; therefore it is beneficial to design baketball drills that provide an opportunity for players to compete against other players or against themselves. The competition increases the player’s enthusiasm for the basketball shooting drill and results in better intensity during the training session. The Two Minute Drill requires only one player. The players compete against themselves for their best score. However, it is extremely helpful to have someone timing the drill.

Many players practice free throws by shooting 100, 200 or possibly more in each practice session. While volume shooting is an important part of developing confidence and rhythm on free throws, this type of practice does not subject the player to the same conditions that exist while attempting free throws during a game. Pressure and fatigue are just two factors that may affect free throw percentage. To be a successful free throw shooter in games, players must be able to step to the line a make two in a row while fatigued and under pressure.

The Two Minute Drill is designed for player to do just that. Players must step to the free throw line and make two pressure free throws while fatigued.

The objective of the Two Minute Drill Game is for the player to move from level one to the highest level possible. In order to advance from one level to another, the player must make a power lay-up, a spin-and-catch intermediate shot and a three point shot.

The player must shoot until he/she has made each shot, even if s/he misses each one four times, the level is not completed until each of the three shots goes in.

After making the three-point shot the player immediately (with no rest!) steps to the free throw line to shoot a one-and-one free throw. If the player makes both free throws he/she advances to the next “level” and must again make a short shot, a midrange, and a three point shot. If the player misses a free throw he/she must remain on that level.

Once the player makes all 3 shots and validates it with a one and one, they get that “level” in the bank. The number of times they do that is the number of levels that they achieve for the drill.

The drill is timed for two minutes. The stopwatch only runs while the player is shooting shots from the field, like a game. It does not run during free throws. If there is no one to time the player can wear a sport watch to time him/herself. The timing of the drill is very significant to its effectiveness because the clock pushes the player to run hard after rebounds and to shoot shots that are more game-like. However, if no timer is available, the player must push him/herself to go hard. To make it competitive, the shooter can be limited to a total number of misses or to commit that the first missed free throw will end the game.

The game may be altered to more benefit to post players. Post players may choose to substitute the three-point shots or the intermediate shots with jump hooks or other post moves. It is easy to come up with several other variations to keep the drill from becoming monotonous.

In the video, the player is shooting a stationary layup. This drill would be better served by having the layups be more gamelike. Have the player start from 10 feet away and make a dribble. Require that they shoot with their off hand. Or, require a revese layup, a Rondo move, or another finsh that you teach. If you teach floaters or runners, make that be the first shot.

Find a way to make it work for what you are wanting to accomplish.

The idea is to find a way to make the drill competitive to motivate your players to go at a gamepace.