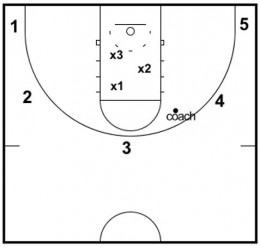 These are some of the notes presented by Dean Lockwood at a PGC/Glazier Basketball coaching.

He is currently the Associate Head Coach for the Michigan State women’s program.

Dean was an assistant in the Tennessee Women’s Program for 15 years.

He was also an assistant in their men’s program for 5 years.

In between those stints at Tennessee, he has been the men’s head coach at Saginaw Valley State, and Northwood University.

The objective of this drill is to develop a mindset of toughness.

The goal of the defense is to get stops & get the shot clock to expire. (Defense must get PERFECT defensive possessions. Shot clock stops once defense secures ball.)

The goal of the offense is to continue to score, get fouled or get offensive rebounds to keep the shot clock resetting & keep the defensive team on defense.

THERE IS A NEW OFFENSIVE TEAM ON EVERY CHANGE OF POSSESSION.

THE DEFENSE STAYS ON DEFENSE UNTIL THE SHOT CLOCK READS 0:00. THIS IS THE ONLY WAY THE DEFENSIVE TEAM CAN EARN THEIR WAY OUT OF THE DRILL.

If defense takes a charge, :05 can be deducted.

You can also use the drill to practice short clock situations. 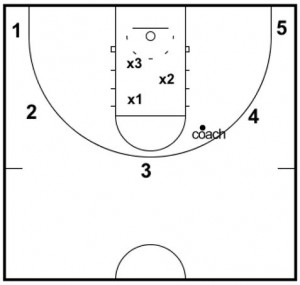 Xl, X2 and X3 are defenders; all 3 defenders start in paint.

Players 1—5 are offensive players, each assigned a specific number. Players 1—5 are positioned outside of arc but can change positons (But NOT their numbers’) and can also move.

Just prior to shooting ball, coach calls 3 offensive player numbers; coach then shoots and misses. The more realistic the coach can make the miss–a shot off the rim that simulates a miss in a game, the more effective the drill is.

The 3 players called by the coach immediately crash boards. Defenders must communicate, box out the 3 offensive rebounders, and secure rebound. They must recognize who the best offensive rebounder who is coming and get that player blocked out.

Once ball is shot by coach, it becomes live play until 3 defenders secure the rebound. The offense looks to score if they get the rebound.

Defensive team lines up across the floor at the level of the block.

Offensive team lines up across the FT line.

If offense gets rebound, they attack & try to score.

If defense gets rebound, they convert to other end.

(2 ways drill can be executed at this point:
5 on 0 conversion or 5 on 5 conversion)