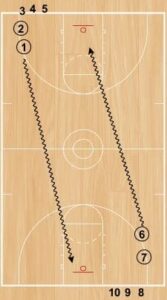 These are some of the notes presented by Dean Lockwood. Dean is currently the Associate Head Women’s Coach at Michigan State. He was an assistant in the Tennessee Women’s Program for 15 years. He was also an assistant in their men’s program for 5 years. In between those stints at Tennessee, he has been the men’s head coach at Saginaw Valley State, and Northwood University.

This is the 2nd part of my notes. You can see the drills and thoughts that I posted last week at this link:
Tennessee Competitive Drills

Have 2 areas of emphasis each practice and hold players accountable for them. Have a full rack of basketballs on the sideline. Each time one of the areas of emphasis is not followed through on, take a ball of the rack. When the rack is empty, the team runs. You can use it for any area, but as an example, Eliminating Turnovers is the emphasis for the day. Each time a turnover is committed, remove one ball from the rack. It is also a powerful visual teaching emphasis.

It’s not what you teach, it’s what you emphasize (old Don Meyer favorite)

Making layups and free throws are keys to being good. This drill is also a conditioner.

(Teaching point for layups: No defense, jump off 1 foot. With defense, shoot a two foot layup for power and balance.

Make 145 layups as a team in 4 minutes drill
If you do 2 minutes, the target number made is 75
(You can adjust the number made or the time for your level and your team’s ability level.

(Editor’s note from Brian) You might also consider shooting left hand dribbles and layups. You could also run the drill by using a pad to make contact with the shooter as he or she goes in for the layup. Experiment a couple of times to see what is a good standard of makes for your players to shoot for. 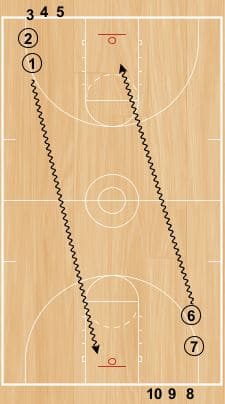 Each player has 4 dribbles to make it to the far basket at other end to shoot a layup.

Put 4 minutes on the clock. 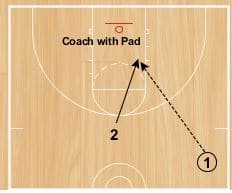 Work on both sides of the floor and finishing with both hands.

You can make cuts from your half court offense or simulate a player catching a pass in transition.

2 can use one dribble to score.

As soon as the basket is made or missed, the next cutter is up-no wasted time.

Coach at basket with pad to work on the player finishing through contact.

Make the drill competitive by having it going at both ends. The end that converts the most layups in a certain amount of time is the winner.

Can do the drill 4 on 4 or 5 on 5. Split players into two teams with different color jerseys. Alternate players by jersey colors and have them run in a circle around the key and free throw line area at one end. Throw the ball somewhere on the side of half court where players are. The team that retrieves the loose ball is on offense and looks to fast break to the basket at the opposite end. The team that did not get the loose ball is on defense. They must talk and match up, then play your rules for converting to defense, stop ball, protect the basket, whatever you teach. Play continues like a game until one team scores. Then, reset the drill with the circle rather than inbounding the basketball after the made basket. Play to a set score, or for a set amount of time.

Each team has it’s own basket, like a game.

Start the drill with 1 red player shooting a free throw, 2 white rebounders, and no one else on the court. Just like a game, if the free throw is made, red gets one point.

Make or miss the free throw, white goes the other way 2 on 1 with the ball vs. red. They get the points 2 or 3 if they score

(Whenever there is a change of possession, play it live like a game, the new players come on on the fly like hockey. The drill does not stop once the free throw is shot)

Each team has 3 possessions.

Start the drill again with white shooting the free throw for the next round.

Play 4 total times, or adjust that number if you need more trips to get all players involved.