This post was submitted by Coach Tom Kelsey.  Coach Kelsey has been a Head Coach at Belhaven University, Faulkner University, and Greater Atlanta Christian High School.  He has also been an assistant at LSU, Alabama, Murray State, and Lipscomb.  He played at Lipscomb under Coach Don Meyer.

As a coach, have you ever had a time in the season or an aspect of the game, you knew a shift was necessary to have better practices?

During this time, I read on article on Sean Payton of the New Orleans Saints. He was trying to find ways to make his team more aggressive. He wanted specifically to convert turnovers into scores for his team.

As I read, I thought, “How could do the same thing in basketball?” We tried to replicate ways to get steals and convert them into turnovers.

We began to implement a 10-minute section at the beginning of practice designed to turn steals or aggressive plays into baskets. We thought of ways within our defensive system and how to take advantage of our players skills. As much as we could think of we wanted to replicate game-like situations.

Almost instantly our guys became more engaged. We saw a dramatic impact how our team competed, and they did a super job of carrying it over to games.

As coaches, often use drills we have always used. Drills we think work well, and ones players know how to run. To change the old way of thinking find drills to resonate with your team.

Here are some specially designed ways to help your team be more aggressive and turn a big steal into a game-changing basket.

The most common mistakes we have as coaches is coaching like we always have. What worked in the past could be refined to maximize your practice time even more.

Take action now by putting these into your practice routine.

Editor’s note from Brian:  This drill simulates making a steal on a full court press and converting to a score quickly.  You will need to develop drills that fit your needs.

Coach throws the ball to the corner. Player 1 sprints to get the ball before it goes out of bounds. As soon as Player 1 gets the ball Player 2 sprints around the coach at the top of the key and dives to the basket.

Focus on players communicating before the ball is picked up. Before player has the ball teammate must let him know where he is on the floor. Player diving to the basket goes with his hands up high and provides a big target. 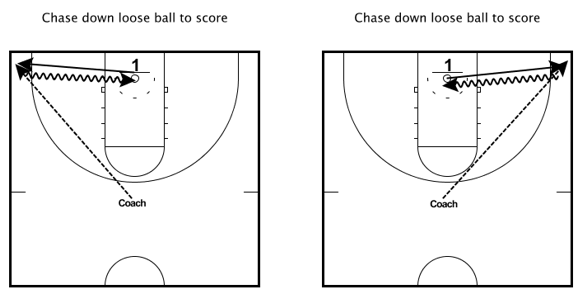 Hustle drill. Roll the ball to the corner. Player sprints and makes sure to get to the ball before it goes out of bounds. Quickly turns and attacks the basket. 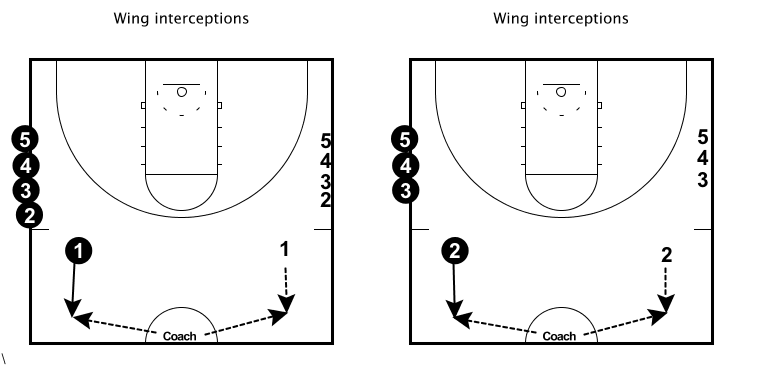 Wing interceptions. Coach stands at half court and throws the ball toward the out of bounds line. Defender takes off to intercept the ball and sprints toward the other end to make a layup.

Interceptions out of a trap. Two defenders put a trap on a coach or player with the ball. Offensive player throws the ball high out of the trap. Other defender comes after the ball to get the steal and make the basket.

Coach or player can also make the pass up the sideline. Defender takes off on the sprint to get the steal and take the ball to the basket.

Teach your players to watch the eyes, hands and feet of the player getting ready to make the pass. As soon as the defender anticipates the pass is going to be thrown cross court he makes a move to intercept the pass. 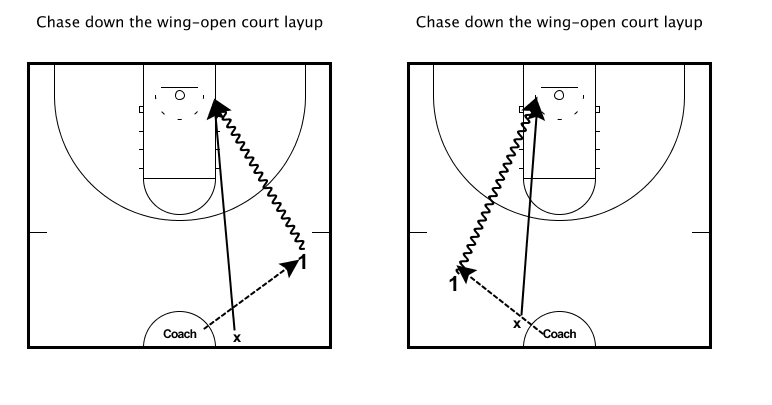 Coach passes to the wing. Offense has a head start. Make it tough for the defense to make the stop. Defense has to sprint to get to the ball. Objective is to get the ball. Do not give up the three point play and do not allow the offensive player to get the ball above the shoulders.

Players can steal or stop easier from the left side of the floor. Most players are going with their weak hand. They are going to have a tougher time scoring from this side of the floor. It is probably going to be a two foot layup or a chance to get an easy steal for players taking a left hand layup.

Cross court interceptions. Coach stands at half court and throws the ball toward the out of bounds line. Defenders take off to intercept the ball and sprint toward the other end to make a layup.

Players deflect or catch the ball and take off toward the offensive end. Coach calls out one or two foot layups on the opposite end to finish the drill.

It was amazing after putting in these drills how often these situations would occur during a game. Our players knew how to react and to convert steals into baskets.