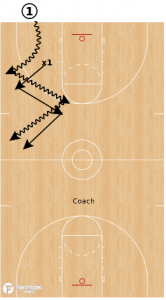 This one on one defensive drill came from the FastModel Sports Basketball Plays and Drills Library.

The drill was contributed by Rory Hamilton, Norman North High School. Here is what Coach Hamilton had to say about the drill:

You can use this in your improvement season skill development drills or during practices.

When guarding the offensive player and finishing the drill, coaches make sure each shot is challenged and followed by a box-out. You can make this drill competitive and have punitive consequences based upon what your team needs. For example, if you are having difficulty challenging shots than make every shot not contested have a consequence.

Find what your team needs and make it a priority in the drill.

Defense tries to get at least two change of directions. 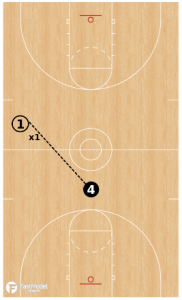 Once at half court, the offensive player then throws the ball ahead to coach at top of the key (4) and proceeds to play live 1 on 1 in the sideline alley.

Offense can use an L cut or V cut to get open and then is limited to 3 dribbles upon a catch. 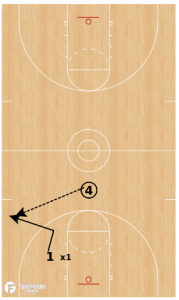 On a catch, the offensive player only has three dribbles and must stay on one side of the floor.

When guarding the offensive player and finishing the drill, coaches make sure each shot is challenged and followed by a box-out.