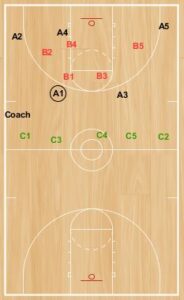 This article was originally written for Winning Hoops

The primary purpose of this drill is to work on your team’s “Transition Game,” whether it is from offense to defense, or from defense to offense, or both. In essence, “Squad A” must compete against two different squads, with each of those squads having distinct position advantages over them. We are using the “overload theory” to make the drill extremely difficult for the chosen squad.

The drill can be initiated with a five-on-five controlled scrimmage with a selected team receiving the coaching staff’s primary focus. In this discussion, we will call that team “Squad A.”   We have Squad A running through their offensive entries and/or offensive continuity against a defensive group that we will call “Squad B.” “Squad A” could work on improving their transition from offense to defense after losing possession of the basketball, via committing turnovers, or after missing or making shots. “Squad C” has absolutely no defensive responsibilities and is stationed in a random manner out near the ten-second line and near the near hash mark.   Their primary responsibility is to be able to generate a fastbreak in a much quicker manner than in an ordinary setting. This puts extra pressure on “Squad A” by overloading the degree of difficulty in achieving their task of defensive transition (after offense).

Defensive Transition after a turnover.—–The first scenario would be implemented in the following manner. The offensive team (“Squad A”) could align in the appropriate offensive set and run an entry or even get into an offensive continuity pattern. On the coaching staff’s whistle, the offense could drop the ball (as in a turnover) and the defensive team (“Squad B”) then recovers the loose ball and immediately outlets the ball to an assistant coach, who is located near one of the two offensive hash marks.

To make it much more difficult on “Squad A’s” task of getting back on defense, the supplemental group of players in “Squad C” could position themselves and be spread out in a manner that they would have a significant position advantage on “Squad A,” in getting down-court.   Obviously, “Squad C” would have a head start as they sprint out and look for the outlet pass from the assistant coach. The assistant coach pitches the ball out to one of the fast breakers on “Squad C” and that group looks to run their primary fastbreak (and on into their secondary fastbreak).   See Diagram 1.

The members of “Squad A” must sprint back “in their defensive fastbreak lanes” as fast as they can to stop the primary fastbreak (and ultimately the opponent’s secondary fastbreak) of “Squad C.” This new offensive fastbreak group of “Squad C” could be instructed to do any one of the following:   a) force a shot out of the primary break or the secondary break, b) force a pass that could most likely become a turnover, or c) remain patient and under control and look to carefully score in a legitimate manner. “Squad A” would be working on attempting to prevent easy shots out of the opponents’ primary or secondary fastbreak. Ultimately when “Squad A” finally recovers possession of the ball, they quickly reverse their direction and sprint back on offense toward their original basket. “Squad A” will not have any supplemental group to aid them in transition, so they will run the entire length of the floor and perform both fast breaks and possibly on into their continuity offense against a defense who has had the head start advantage of being able to defensively set up ahead of time.

“Squad B” (the original defensive group) has gained their advantage by moving toward the ten second timeline, while “Squad C” has attacked “Squad A.” “Squad C” will easily and always get back ahead of “Squad A.” “Squad A” now is forced to execute both their primary and secondary break, possibly into their continuity offense. See Diagram 2.

As “Squad A” then offensively attacks Squad B, the supplemental group, “Squad C” positions itself ready to run another offensive fastbreak. The cycle is ready to be repeated. Both the B and the C Squads start with position advantages and also enjoy a breather, while the opposite squad is competing against “Squad A.” But, “Squad A” never has a position advantage on anyone and also never has a breather. “Squad A” competes against both squads. This is the “overload method” we are wanting to place on the primary squad–“Squad A.”

There are many benefits in this drill for each of the three groups. “Squad A” will receive work and practice in the following: a) running a half court offense, b) reacting and getting back on defense after turnovers or made/ missed shots to prevent easy lay-ups by their defensive opponents, c) reacting quickly to run their own primary and secondary fastbreaks on offense (from a half court defensive setting), and d) a great deal of full court conditioning as they work on the different aspects of their “Transition Game.“

Squad B will be able to work on their half court defense as well as the back part of their defense versus an opponent’s fastbreaks (in a controlled setting). “Squad C” could be a less talented team (JV or a Freshmen) that could work on the latter half of their offensive fastbreaks–a little of their Primary Break as well as their Secondary Break.

“Squad A” and “Squad B” could easily exchange their original positions so that “Squad B” could receive the most attention and work on their own Transition Game-both offensively as well as defensively.

This drill requires the full court and a minimum of at least 15 participants, with each squad having the ability to easily and quickly substitute others into the drill. There could actually be three different coaches coaching each of the three squads, with all three coaches having different “points of emphasis” to constantly observe and critique.

The primary emphasis of the drill will be devoted to “Squad A;” therefore that group would have the largest number of “points of emphasis.” There can be many “points of emphasis” implemented with the imagination of a coaching staff, but some of the most important would be the following: a) Making sure the “Tailback,” the “Halfback,” and the three “Fullbacks” get in the proper positions after our offense has shot the ball. (Our “Tailback” is what we call our Safety, our “Halfback” is our designated “half-rebounder and half-safety” and our three “Fullbacks” are our three assigned offensive rebounders), b) Making sure that all five players sprint back in their defensive fastbreak lanes (while looking over their inside shoulder) and set up defensively in the lane, before building the defense from the inside-out, and c) Making sure that either the “Tailback” or the “Halfback” becomes the “Ball Man,” while the other becomes the “Basket Man,” and d) Making sure that the “Ball Man” and the “Basket Man use the proper procedures and techniques to defend the basket and buy their three defensive teammates some time in getting back. (See the “Ball and Basket” Transition Drill in Diagram 3), and e) Making sure that all five players then get out quickly and run the proper lanes while executing their Primary Fastbreak, their Secondary Fastbreak, and their half-court offenses.

Squad B would have the following “points of emphasis” continually being used to evaluate, correct, and critique them: a) The proper techniques and concepts used in their half court defensive philosophies, while b) “Squad C” would have as their main “points of emphasis” all the concepts, philosophies, and techniques used in their offensive fastbreak system–both primary, secondary, and half court offense. See Diagram 3.

There are many products produced from this drill, in addition to the many by-products that can be utilized. The major products are that a select group of players can be closely scrutinized and taught efficiently in a relative small amount of time. This group can prepare in a very real game-like situation. The only part of the drill that does not resemble game-like situations is the part of the drill that provides an overload facet-thus making the drill more difficult than would exist in an actual game. A concentrated effort can be made by coaches in working with individuals in that selected group. Transition from offense to defense as well as from defense to offense can be worked on. Half court offense and defense can be evaluated as well. The physical conditioning of the players of that selected group will be improved on. Players can easily be inserted into the particular group to be put ‘under the microscope’. The Super Transition Drill can be an extraordinary drill in that it can be extremely time-efficient, thus allowing time in your practices for working on other facets of the game. The overload method of working one particular team against ‘tougher than game’ conditions makes the drill an invaluable drill. Besides offenses and defenses being worked on, the all-important part of the Transition game, becomes the focal point of the drill. During this drill, many offensive concepts and philosophies can be taught, reviewed, drilled, observed, evaluated, critiqued and corrected with the players. Likewise, many defensive facets of the game can be practiced with a different group of players at the same time. During the utilization of this drill, a great number of players will be able to watch, listen and learn, participate and practice in the performance of the drill. The drill will not be boring. No player should have to or be allowed to stand around while the drill is being run. It is also an excellent method of unobtrusively conditioning your players as they are learning and improving many different aspects of their game. It allows a large number of coaches to coach and an even greater number of players to learn, all the while being in the same setting.