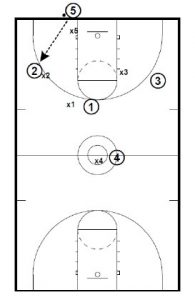 55 Defense is a full-court half zone, half man press

• The 2 and the 3 are assigned a side of the court that they stay on
• If their men switch sides of the court, the 2 and 3 release them to the other side and stay on their side
• Running 55 forces the other team to prepare for you 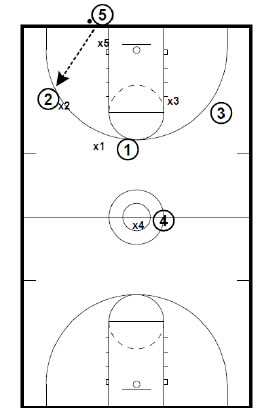 • Not concerned with lateral passes

• 5 is the hardest worker, traps all over the floor, willing to run, hands are up touching on top as he covers the inbounder, wants the ball to be lobbed, bounce passed, or deflected

• 2 is on the man side of the zone (ball side), picks up the 1st pass to the left of the 5, responsible for trapping and tracking in his lane

• If the 2 winds up on the weak side, he is in the middle behind the trap

• 3 is the same as 2 on the other side of the floor except he starts out in zone on the weak side, responsible for the 1st pass to the right of 5 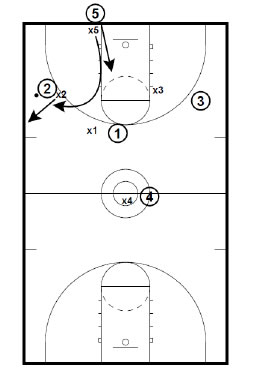 • 5 makes a C move to trap the inbounds pass

• Don’t trap in the middle

• Traps are always on the side

• If the 2 gets beat up the sideline, he c moves to track down the player in his lane
• “House on fire!” – ball beats the defense

◦ 5-on-5 Full-Court
▪ Have all 10 players run in a tight circle in the lane
▪ Coach drops the ball and yells, “Shot!”
▪ The offense picks the ball up and inbounds it, it is now live 5-on-5
▪ The 2 must create contact on the ball side
• Hit the cutter with an arm bar
• See the ball, feel the man
▪ Check 3’s positioning to make sure he can’t get beat deep
▪ 3 gets closer to his man as his man gets closer to the ball
▪ If 1’s man cuts to the ball, 1 yells cutter and passes man off to 3
▪ If the inbounder runs the baseline, 3 denies in man and 2 becomes the zone defender as the ball side and weak side get switched
▪ 5 C moves to the 1st pass and uses short choppy steps to slow down as approaches for the trap
▪ If 4’s man cuts, he calls cutter and passes him off to 1
▪ 1 lets 4 know he has made the switch
▪ 4 drops back on deep man
▪ Emphasize talk and contact with arm bar
▪ Defense needs to get their arm over the offense’s arm so the offense cannot bring their arms together 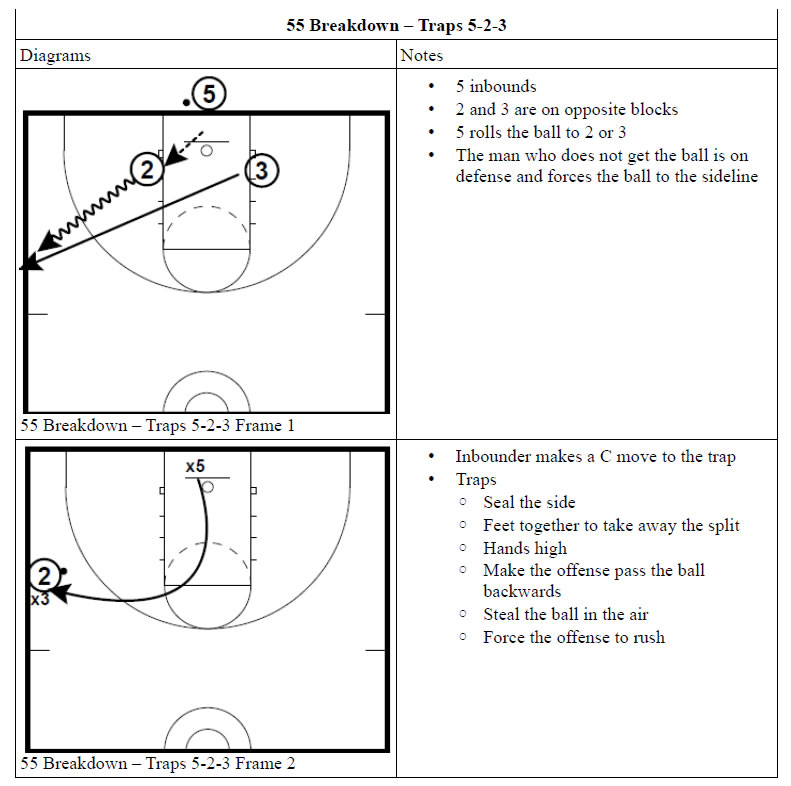 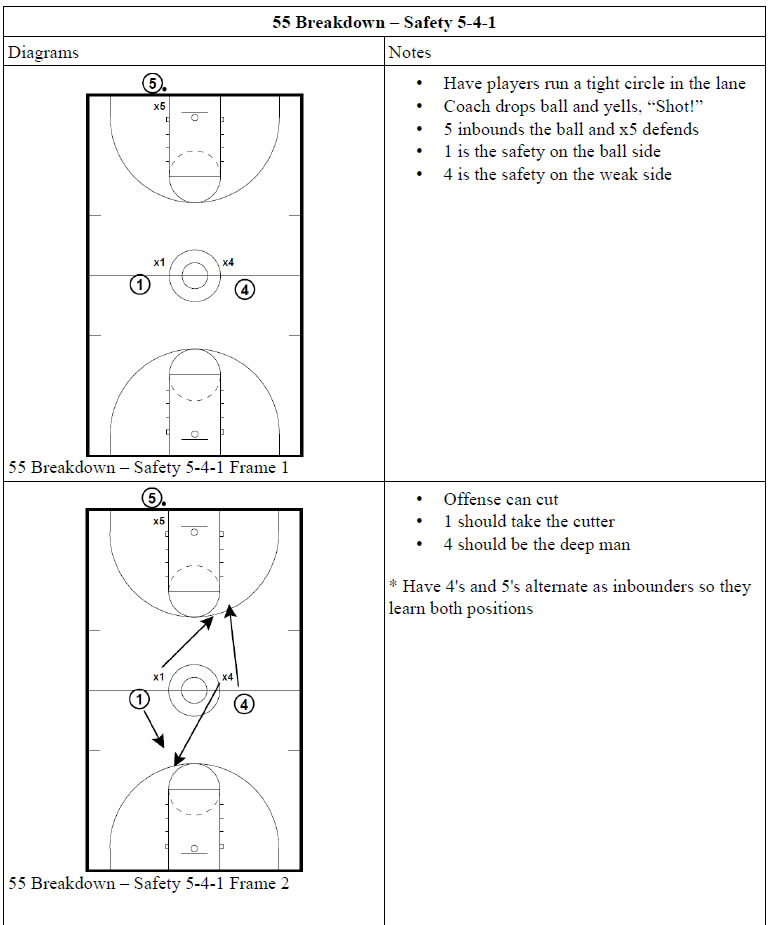 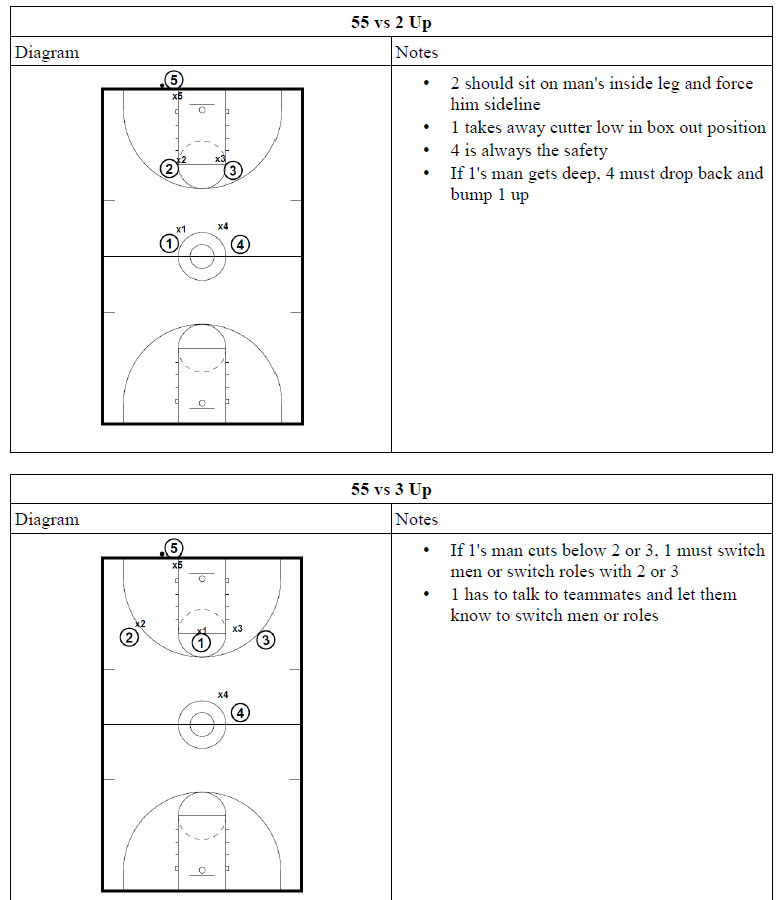 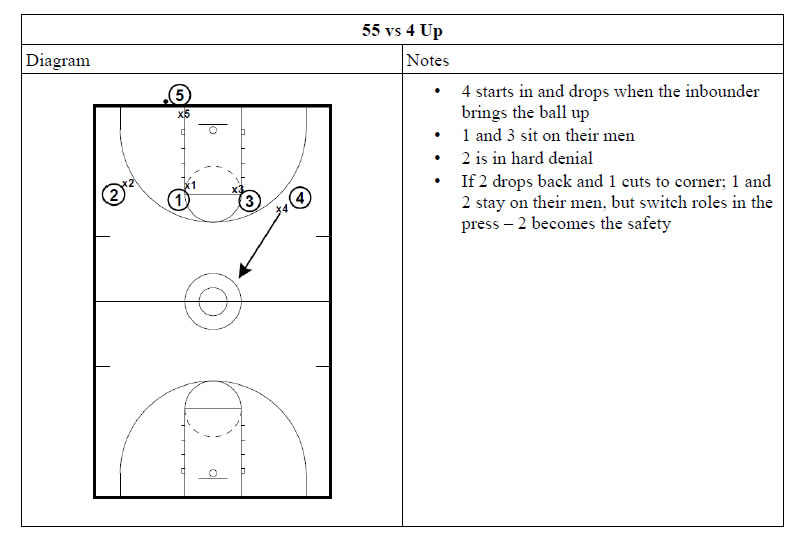