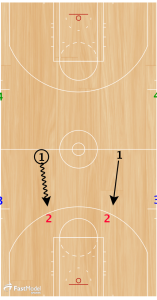 This drill came from Drew Hanlen.

He is the Head Skills Coach for Pure Sweat Basketball.

The drills was posted on Fast Model Sports Library. It is a reference of thousands of plays and drills that have been submitted by coaches all around the world. You can take a look at it’s content at this link

Team 1 gets three passes to score.

Players get three dribbles max each time they have possession of the ball. 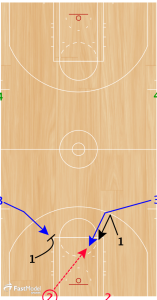 As soon as Team 3 successfully receives the inbounds pass (or stops Team 1 if they stole the inbounds pass and played live), they play full-court 2v2 against Team 1. No over-top passes until the handler gets passed half-court. After Team 2 scores or gets stopped, Team 1 will inbounds the ball to Team 4, while Team 2 denies. Drill continues. Continuous 2v2 full-court with inbounds denial.