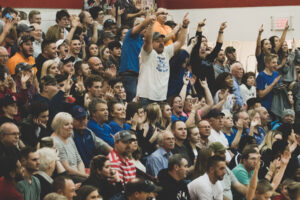 While it may not have a direct impact on the score, a positive coach-parent dynamic is crucial for team health.

If you lose a game as a coach, it’s definitely your fault. When you win a game, the players get the credit and someone is probably grumbling that their kid didn’t play enough.

We all want the game decided on the court or field, and the kids to be the chess pieces that make it happen. Studies on the brain have told us neurons must fire at the same time consistently—that’s how I see the parent-coach relationship. We all have to be on the same page.

We live in a world of Twitter finger pointing and second guessing of coaches. Often times, some poor kid has to sit through their parent berating the one person who sees him or her more than their family. That man or woman who’s a mentor, who fuses sports and character decisions that to translate to life long, trajectory-changing outcomes.

Who gains the least in this testy dynamic? I’ve witnessed parents walk their children out of practice (why were you even there?). I’ve seen parents try to fight coaches. I’ve observed parents threaten to pull their kid from the school. I’ve been present when parents blame the coach for their young scholar’s lack of academic performance.

See It From the Other Side

For parents to grasp the true genetic makeup of the coaching profession, they must understand that mentoring, accountability and third-party parenting is now a part of the job. Before buying into the team, parents need to buy into the coach.

As a coach, you have to initiate a relationship based on communication transparency, not strategic transparency. The moment you start discussing in-game strategies with a parent, you’re inviting them into your coaches’ huddle. In the same way, parents shouldn’t feel assume a coach’s participation in any parental duties (even though many coaches do without question).

Coaches and parents are teammates—the same rules must apply. We must be respectful and act in the best interest of the scholar athlete. As teammates, we should communicate about development, academics and character, not about playing time, chores at home, other players or how the scholar athlete treats their little brother or sister.

Sharing these types of opinions with parents could lead to team division or a breach of trust within the player-coach relationship. Just like it does when parents push strategies on a coach or berate them.

I don’t know one coach who chooses to lose. So never question their intentions around winning. If parents have an issue with delivery, language or environment, those concerns would be warranted. But concerns should be saved for the proper time, like a one-on-one meeting.

For any parents reading this entry, my main motivation is to help your child understand the three pillars necessary for success: effort, talent and competitiveness.

Being a part of a team is a shared mindset. In sports, the team is fixated on success and a player’s individual growth is found within the team’s. So let’s all work together to help players focus on playing, coaches focus on coaching, and parents focus on being supportive.

(All this being said, if your player’s coach is embarrassing or humiliating your child, there’s no excuse. That coach obviously isn’t building character or self-esteem, so remove your athlete from the team.)

The messages and actions between coaches, players and parents often aren’t clear. From my experience, these translations could help address the elephant in the room.

The coach-parent relationship may not contribute to a team victory. But an ego-free partnership can help create a blueprint for student athletes to follow, leading to the life skills they need for the real world. Isn’t that what we all want?

Cory McCarthy spent more than a decade coach­ing bas­ket­ball. As Direc­tor of School Cul­ture and Cli­mate at New Mis­sion High School, he has helped lead the school to being named the 2012 EdVestors’ School on the Move, 2013 Nation­al Blue Rib­bon School for Improve­ment, and the 2017 Title One Dis­tin­guished School. McCarthy has rep­re­sent­ed Boston Pub­lic Schools at con­fer­ences such as ASUGSV Tech­nol­o­gy Sum­mit in San Diego and COSE­BOC in Boston, MA and New York, and has been a guest lec­tur­er at Emer­son Col­lege and UMASS Boston.