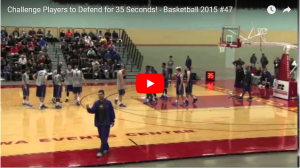 He has his team execute for 35 seconds since that was the college rule at the time that this video was filmed.

You can set the time length for anything that challenges your players.

When I have used this drill, we have used it as a toughener drill to end practice with and set the time at 51 seconds.

I selected that time because one season, our average time in the half court portion of our defense was 17 seconds and I wanted our players to prove that they were more than tough enough to make a stop at the end of a game because they had done 51 seconds in practice.

My focus for the drill is execution, and not just results. We do not start over if the other team made a shot as long as it was challenged and we had all of our block outs completed correctly.

We also started the 51 seconds over if the defense was not talking or not in proper help positions. You can add anything to the defensive violations list that you emphasize.

One idea you might consider adding to the drill would be conversion defense, rather than just running the drill half court.

You don’t have to stop to huddle each time the clock stops. Use his ideas as a guide to set the drill up as you want to.

If you are interested in learning more about the DVD that this sample was taken from, click here: Open Practice with Ben Jacobson