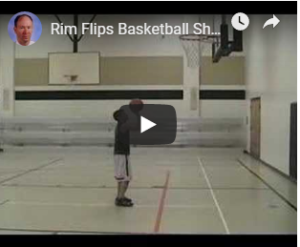 Getting the ball straight is the most important factor in being a consistent shooter. Shooting with one hand helps to work on shooting the ball straight and concentrating on the backspin rotation of the ball. This drill is to work on technique, foot position, and body alignment and not to simulate anything close to game speed. Rim flips are solely for refining and maintaining technique and form.

Stand an arms length directly in front of the rim. Set the ball for the normal shot and then take the balance hand away. The entire focus of the drill is on correct shooting fundamentals. The initial stage of the drill does not involve jumping. Think of it as a short free throw. After making 10 in a row without hitting the rim, the shooter moves back two steps.

After moving back two steps, place the guide hand on the ball, but use the exact same technique as before with the shooting hand. Once you can make 10 in a row, move back another two steps and work to make another 10 in a row.

Eventually, you will jump toward the basket and land six inches closer just like you were taking a shot in a game. Work on the landing in all three phases of the rim flips drill. Here are some videos of some other shooting drills from some of the top NCAA coaches: