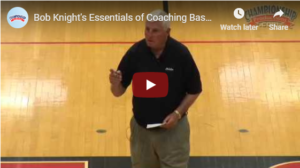 No matter what your opinion of Coach Knight or of these points, (Or any coach for that matter), there are still some good points you can adapt and make your own. Certainly there are some points that you don’t agree with, but hopefully some you can use!

Also included in the list is a short video of Coach Knight giving an explanation of one of his points on timeouts.

Click the play arrow and make sure your sound is on to watch the video. If you are interested in learning more about the basketball coaching DVD that this sample came from, click this link: The Essentials of Coaching Basketball