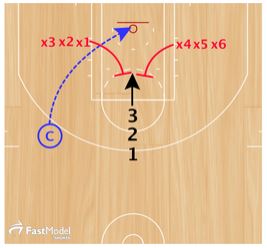 This drill was contributed to The Fast Model Sports Basketball Drills and Plays Library by Drew Hanlen, an NBA Strategic Skills Coach & Consultant.

He has helped over 25 NBA and NBA pre-draft players including David Lee (Mavericks) and Bradley Beal (Wizards).

Drew is an NBA Strategic Skills Coach & Consultant that has helped over 25 NBA and NBA pre-draft players including David Lee (Warriors) and Bradley Beal (Wizards).

He has run his internationally renowned Elite Skills Clinics in over 30 states and 4 countries for several years.

He is also the Head Skills Coach for the Reebok Breakout Challenge and has worked various events for Nike Basketball.

This is a great drill to get your players to box out on defense and crash and avoid box outs on offense. Too many rebounding drills benefit the taller players and don’t truly reward players for boxing out or getting around box outs, so this drill is perfect to reward pursuit effort.