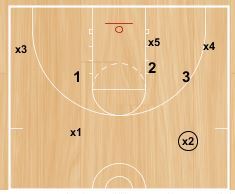 As in the majority of the drills, coaches should try to make the drills as “game-realistic,” as competitive, and as time-efficient as possible. Coaches should want to incorporate some offensive concepts and philosophies for one group of players to work on as another group within the drill works on developing specific defensive skills. This drill philosophy provides offensive as well as defensive teaching and practice during the same drill.

This drill can be a very effective breakdown drill for specific players to work on their particular transition responsibilities and assignments both defensively as well as offensively. This drill can be set up primarily for the two most important players in a team’s defensive transition—the two defenders that are to be first in getting back on defense. Every player should work on these two defensive positions because any player can end up in one of those particular positions. While not disregarding the other players in this drill, the two players that should be the first main focal points of the coaching staff’s attention are the initial two offensive players that will quickly become the two defenders that are in transition offense to defense. They are players X1 and X2 in the following diagrams.

If an offensive team shoots, misses, and surrenders a defensive rebound; there are two assigned positions for the first two defenders who are to get back on defense to protect their basket. If the offensive team loses possession of the ball via a turnover, there are no definite defensive transition assignments–it is simply imperative that the offensive team’s basket is immediately protected, regardless of who gets back first. That is the main reason that all players should be placed in these two positions with this drill.

THE INITIAL “3-ON-2” PORTION OF THE DRILL

The drill can be set up with two defensive players (X1 and X2) starting the drill by literally being seated near the offense’s sideline hash-mark, and three offensive players (O1, O2, and O3) in lines that start on the offense’s baseline. The ball is advanced via dribbling and/or passing with the three offensive players staying in their three wide lanes as quickly as possible to attack their basket. The two defenders must quickly scramble to their feet and then sprint back to defend their basket. (See Diagram 1)

The first defender that gets back (X1 or X2; X1 in Diagram 2) settles in near the dotted circle in the middle of the lane and yells “Basket!” The second defender (X2 in the same diagram) that hustles back settles in the lane and cautiously approaches the dribbler as far out as the top of the key, by yelling “Ball !” The “Ball-Man” (X2) stops the dribble penetration of the dribbler, while the “Basket-Man” (X1) protects both low-post “blocks” and takes both the first and second perimeter passes made to either wing and then back to the center of the court. Therefore, when the offensive team passes the ball to either wing, the “Basket-Man” (X1) rotates out to defend the ball, while the original “Ball-Man” (X2) drops quickly down the lane to protect the basket. (See Diagram 3)

If the ball is passed from the wing back to the point, the original “Basket-Man”—X1 (who has defended the “Wing-Pass” — the first pass) would then defend the “Reversal Pass” also. This allows the original “Ball-Man”—X2, who has dropped down to protect the basket, to remain low to continue protecting both “blocks” and the basket. (See Diagram 4)   To explain the rotation and the coverage in a simple manner, coaches should use the phrase, “The first ‘Ball-Man’ must stop the ball and the first ‘Basket-Man’ has the first two perimeter passes!”

Major Points of Emphasis for the Defense

If the ball is centered up and then passed again from the top of the key to the wing on either side, the current “Basket-Man” (X2) would again come out to take the next two perimeter passes, with the current “Ball-Man” (X1) again dropping quickly to protect the basket. (See Diagram 5) The major points of emphasis for the two defensive players (X1 and X2 in Diagrams 2 thru 5) are:

The phrase used in teaching this part of the defensive transition is “Solidly build the defense starting from the basket and then build it out to the dribbler.”

Major Points of Emphasis for the Offense

The major points of emphasis for the three offensive players (O1, O2 and O3 in Diagrams 2 thru 5) are:

When the three offensive players (O1, O2, & O3) lose possession of the ball because of a made shot, a missed shot, or a turnover; either the shooter or the player who committed the turnover must turn and sprint back to protect the far basket by himself. The original two defenders (X1 & X2) would then sprint back and run a two-man offensive fastbreak against the new lone defender. (In this case, the lone defender is O3).

The new lone defender works on his defensive techniques as a solo defender against the two offensive opponents trying to score an easy basket against his transition defense.

Major Points of Emphasis for the Defense

The major points of emphasis for the lone defensive player (O3 in both Diagrams 6 and 7) are listed below. The lone defender should:

Major Points of Emphasis for the Offense

The major points of emphasis for the two offensive players (X1 and X2 in Diagrams 6 and 7) are:

After one shot or turnover, the “2-on-1” action is over. Then quickly begin to set up the next “3-on-2” scenario, and the drill continues without any interruptions. (See Diagram 7)

This drill works on specific techniques for the defensive transition as well as the offensive transition. Offensive fundamentals such as passing, catching, dribbling, running, shooting, and quickly getting back on defense are incorporated in this drill on a fast paced full-court scale. Defensive fundamentals such as stopping dribble penetration, guarding the ball, reacting to passes, defensive box-outs, defensive rebounding, and quick and immediate full court offensive transition. For both groups, there is a certain level of physical conditioning in running full court sprints.

This drill is a unique way to break down techniques and concepts to both teach and review to all players concerning offensive and defensive basketball. Defensively, a coach must be able to teach and coach his players to prevent the opposing teams from getting any easy points. They must instill the philosophy “That if a team is going to score on us, they must have to work to earn those points!” Conversely, successful offensive teams are teams that know how and are able to score a few easy points in each and every game to counter the tough defenses that they will eventually face somewhere in their season.

The drill allows for players to be able to run and jump and cut loose with a lot of energy. It can be a helpful conditioning drill, but also a motivational and inspirational way to start off a practice with all of the movement and structured freedom that can be incorporated into the drill.

And as in all of the drills, it combines both offensive and defensive fundamentals and basics into the same fluid and time-efficient drill; making it an invaluable teaching and evaluating tool for coaches.