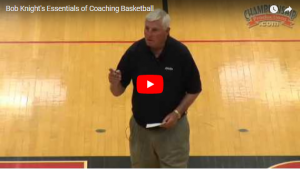 I recently read the book, “The Power of Negative Thinking” by Bob Knight. I have listed some of my takeaways from it on this post. If you are interested in finding out more about the book or reading a sample, you can do so on the Amazon web site by clicking on the book cover below.

Click the play arrow and make sure your sound is on to watch the video. If you are interested in learning more about the basketball coaching DVD that this sample came from, click this link: The Essentials of Coaching Basketball