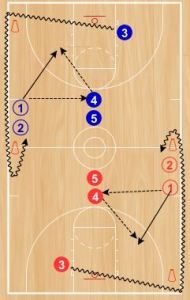 Let me know if you would like to be added to his newsletter.

Thought you might be able to use this drill to conclude your practices to do some conditioning with a basketball, work on scoring in transition, as well as force your players to shoot and compete when tired.

In the version from the newsletter, the passer at that top of the key is a coach and every player has a basketball.

I like the idea of having players work on making good passes to the shooter, so I have made some adjustments.

Split the squad into 2 teams–one at each end. In the diagram, red team and blue teams. 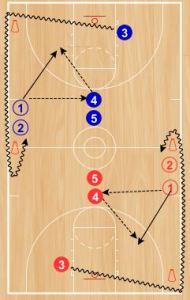 Players 1 and 2 have basketballs, player 3 is the rebounder, and 4 and 5 are the passers.

Player 1 passes to player 4, cuts to the basket, receives a pass back and takes the shot. Player 3 rebounds. After shooting, 1 goes to the end of the passing line. 3 rebounds and dribbles around the cones back to the back of the shooting line. 4 (who passed to 1) becomes the rebounder.

The first end to make 20 shots wins that round. The winning team must “verify the win.” One player from the winning team has to go to the free throw line immediately and make one free throw. If the player misses the free throw, the win for that round does not count. Verifying the drill is something you can use in many of your drills to force players to shoot some free throws under pressure.

First end to win 3 rounds (and verify them) is the overall winner. Every player shoots the same type shot for each set of 20 makes. Make sure to only shoot shots in this drill that you would consider to be a good shot in transition. Here are some ideas for shots to use: