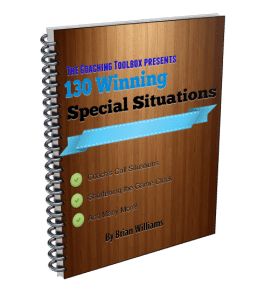 The purpose of this post is not to say that these ideas will work for every situation and every player. Every situation is different.

The purpose of this post is to say that thinking through scenarios ahead of time without the additional baggage of in-game emotions will allow you to reach better decisions on what you should do. I think it is also best to base our beliefs on sustained thought using data and not simply accepting the traditional approach.

When do you put a player back in the game with 4 fouls? There are many factors that influence your decision such as your team’s depth and the temperament and experience of the individual player. To make these types of decisions most effectively, we need to spend time thinking about then before they have to be made.

Bill Walsh state in his book The Score Takes Care of Itself: “The more thorough your preparation, the more extensive your thinking on the topic, the more rehearsed, the better you perform under the pressure of any situation that calls for an immediate decision. When you prepare for everything, you’re ready for anything.”

The traditional thinking is that a coach should remove a player, particularly if that player is one of the team’s best players, when he or she is 1 foul from fouling out of the game. The coach’s decisions then become, “When do I put the player back in the game for good?” or “Do I substitute on offense and defense to try to get some use out of the player.”

I have always felt that it is better to put a player back in too soon and have him foul out than to keep him on the bench too long and feel (after the game is over) that I should have put him back in sooner. If he fouls out, then at least I know that I got every second out of him that I could have. If he finishes up with four fouls, then I wonder how much more time he could have played before fouling out rather than wasting on the bench.

Some would argue that if an important players fouls out, you don’t have him around for “crunch time.” My argument is that baskets and free throws at the end of the game count the same as at any other time during the game. If you could have your player for the last minute or for an extra three or four minutes earlier in the game which would you choose? I’ll take the extra minutes. What if a player won’t play hard–not wanting to pick up the fifth foul. If I see that, I do take them out and make sure they know that they are not coming out because of foul trouble, but because they are not playing hard.

Whether or not you agree with me, I urge you to give it some thought and decide how you will handle end of game foul trouble now without the pressure of competition when you can think more clearly. There are definitely several decisions we all make that would improve and become more clear to us if we applied some sustained thought to them.

Two other pieces of data from the Scorecasting study are that: 1) A player with five fouls, will foul out 21% of the time in the NBA. 2) Leaving a “star” player with 5 fouls in the game rather than putting him on the bench improve the team’s chances of winning by 12%. So, you have pretty good odds that a player will not foul out and you are improving your chances of winning by leaving him or her in the game.

Yes, you can occasionally get a bad call that puts a player’s 5th foul on him. I believe that a bad call on the 5th foul is almost never the reason for a player to foul out. It is usually the silly fouls that he picked up earlier in the game that put him in foul trouble. Reaching fouls, over the back with no position and no chance at the rebound, driving out of control, fouling a jump shooter, and other needless fouls are what players need to eliminate. Then, an occasional bad call is not going to cost them and their team.

One other type of foul that I want our best players to steer clear of is fouling to stop a breakaway layup. The two points he surrenders by not contesting the layup are much less costly to our team than him getting one foul closer to disqualification. 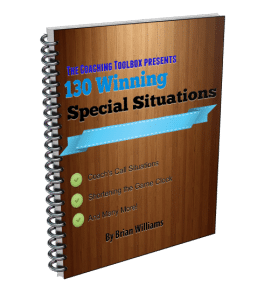 Click the link to see more about 130 Winning Special Situations

This eBook contains 130 ideas that will improve your team’s performance in special situations, addressing areas such as:

Emphasizing the importance of every possession,
End of game communication.
21 examples of specific time and score situations – and how to teach and practice them.