The “Zone Problem” in Basketball

The “Zone Advantage in Basketball”

He uses these points to sell his players on the effectiveness of what they do.

Their results show that their multiple zone defenses are difficult to score against and they foul very little–another key to maximizing talent–keeping their players out of foul trouble and in the games.

When you play zone defense, you need to be prepared to receive criticism and you will get it. You will hear things like:

Foundational Stones of their Zone Defenses

They need to work on, drill, and practice these defensive areas each day

Execution of their defenses 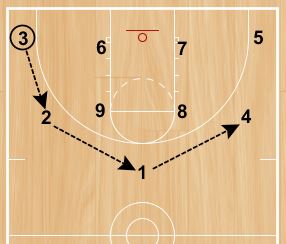 9 offense, 5 defense, cover 1 pass at a time, then make the next pass.

They bump their forwards as little as possible.

X1 is the plug position and plays facing the ball with his back to the top of the key. He is positioned to keep the ball out of the post.

X2 is the wedge and is just above the high post. 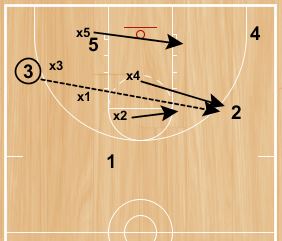 The three players involved in guarding the skip pass in the diagram at the left are:

They teach to closeout with one hand on the basketball and the other hand in the next passing lane.
The helpside forward must be aggressive and fearless. His focus is on covering the skip pass when it is made and weakside rebounding.  He plays a step off the midline.

The coverage for when the ball is passed to the corner 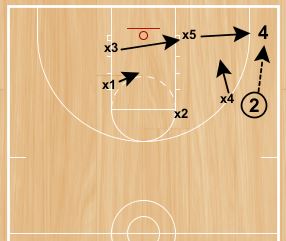 Other actions they work to cover every day.