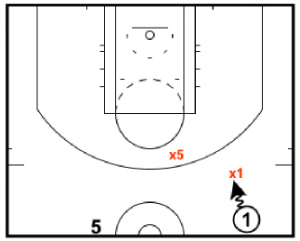 Coach Boisvert has posted several videos of some of the better schemes he has seen. His You Tube channel is: Zak Boisvert You Tube Channel

Editor’s Note from Brian.  The post is provided as food for thought, not to imply that you should implement all of these tactics. I realize that both the rules and the abilities of players vary greatly at different levels of play.

-It’s in transition where great players are most dangerous. We have to be alert with our antenna up.

-Whenever a great player is isolated, we have to shrink the floor (no gaps; make the lane as tight as possible).

Versus the great point guard:

“Load to the Ball”

Below the ball and in this gap. If the great point guard sees this gap, they’re attacking this every time. If he doesn’t see a gap, he might be more likely to pass the ball—which is what we want. On the pass, we can deny it back.

If we load correctly, we take away this guy’s seam. 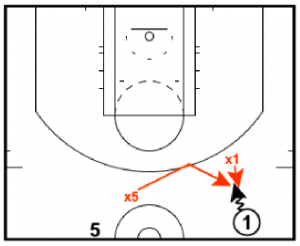 Get the ball out of his hands. Come all the way over and make him pass the ball. On the weak side, we have to zone
up. We’re not going to rush up at 5 if the pass is made there. We’re going to stunt from the weakside as x5 sprints
back into the play.

After a free throw, we don’t want to let Stephen Curry touch the ball. Whichever big for the other team is taking the ball out, we take his defender and play in front of the point guard (x1 plays behind) to deny him the ball. In an ideal situation, we’d like the opponent have to bring someone else up the court to catch the ball and initiate the offense. We would continue denying the point guard the ball (with just x1; x5 would return to his man).

After a free throw, the inbounder’s defender plays on the ball. The ball is inbounded to the great point guard. As the inbounder begins to head down the court after passing, his man (say x4) stops and runs at the ball for a soft trap (“Your guy goes away and then you start to come up”). We’re not going to run at him and leave us susceptible to him blowing by us. We’re trying to cause indecision and break his rhythm. 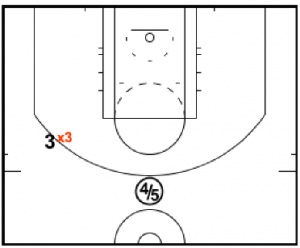 The big has the ball above the free throw line and is the trigger man. The big having the ball on the free throw line is going to dictate us denying on the wing. We don’t do the traditional denial stance that your high school coach taught you. We “contact deny” with an arm bar into his oblique with one foot behind and one foot in front. Defender is underneath the offensive player (in between the great player and the basket) where if the offensive player were to cut, he would have to run the defender over. We want to push his catch out away from the rim. 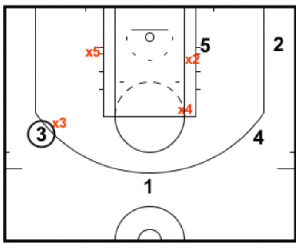 The low big comes all the way over to the ball-side block. That great player is holding the ball on the wing knowing that if he’s going to drive, we’re going to bring early help. We’re into the ball, making him go baseline and trace the ball (we can’t let him scan). X2 has to sit on 5’s legs and x4 needs to be ready to fly out at 2 on a skip pass (x2 and x4 would x-out with x2 taking 4). 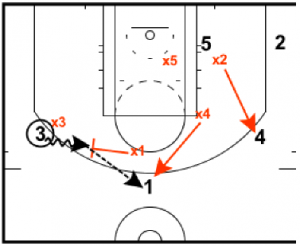 Rather than making the ball-handler go baseline, the on-ball defender sends him to the middle and we’re going to double with full rotation. We love to do this with around 7-8 seconds left on the shot clock. We will full rotate with x4 moving up to take 1, x2 moving up to 4. We would prefer the guard (x1) to rotate through the big to the corner (2), but if they’re moving it quick and x5 needs to closeout on 2 in the corner, we’re prepared to do that. If that were to happen, x1 is instructed to face box-out 5. 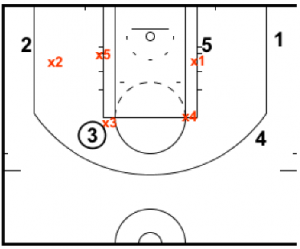 -First off: make the catch hard. Push it out as far as possible

X5 comes over. X3 provides ball pressure and makes him go to the baseline. X1 sits on 5’s leg with x4 ready to x-out on a skip. 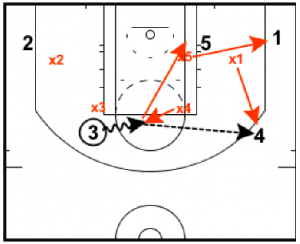 X4 goes. X1 sprints up to take 4. We probably won’t be able to rotate through the big so X5 will need to get out to the corner with x4 taking 5. 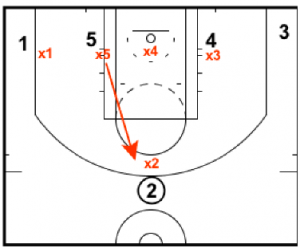 -Drive the catch out. One step makes a difference.

We’re going to come with the big to the weak hand of the isolated offensive player. X4 needs to come over. X3 pinches in to sit on 4’s leg. We’re going to dare him to throw the pass to the corner across his body.

Catch-and-shoot (shooter coming off a screen): 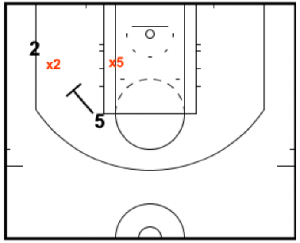 Don’t allow the great shooter to use the screen. We’ll play him on the high side and force him to cut to the baseline. The big needs to open up and see the ball (can’t give up a lob). The better the shooter the big is, the closer you are to him. If the screening big isn’t a good shooter, we can play way off. 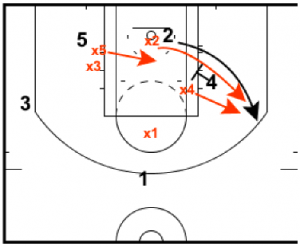 Shooter’s defender locks and trails. Screener’s defender traps right away on the catch. The other big defender pulls over. It is very important that we are quick with this. We are putting 2 on the ball and our rotation needs to be quick and early.

-We’ll often go “top lock” and if the shooter goes under the rim and comes out the other side, we’ll go “Blitz”

Versus the post-up (wing player):

Dead front – sitting right on the post player’s thighs (good to spin into the front) and push him back. Driving him back shrinks the window that the passer has to make the pass. Ball pressure on the wing is critical. If the pass is made, the guy fronting should jump and attempt a steal (maddening how few times this guy tries to get the steal).

On the catch, we come with the low man on the weakside and we seal him into a trap with the 2 defenders. 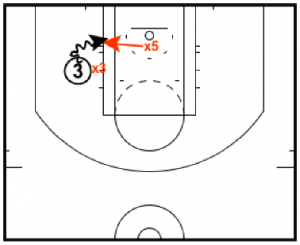 We’re coming from the baseline to double-team on the dribble. We’re not allowing the offensive player to go middle. Our baseline arm is on his body and our high arm is poking at the ball. You’re going to make sure he spins baseline.

We start with one foot in front and one foot behind with the player’s chest leaning on the offensive player’s shoulder. Our double-team will be “Gray” (coming from the baseline) just like against the wing posting. We come for the double with whoever is the lowest man. On the catch, our baseline arm is on his body and our high arm is poking at the ball. You’re going to make sure he spins baseline. On the double, we form a T with our feet (no splits – body up). On the weak side, we form an I.

-You have to give the great player different looks. They can’t see the same thing over and over. They’ll pick you apart.

-Whenever you double-team, you’ll be susceptible to the second shot. It’s very important that the guy that came for the double-team

You can see the original article and download the pdf at: Mike Longabardi Clinic Notes