The site has a lot of quality coaching ideas and information.  Definitely worth a look!

DEFENSIVE PHILOSOPHIES
o Times are always changing.
o IMPORTANT when developing your defensive philosophies: “How you teach it, how you build it”.
o Question to ask yourself: Are you playing the way you have “built it”.
o The way we track success at University of Arizona is:
• Points per possession;
• FG% Defense;
• 3FG% Defense (Good teams are vulnerable) & attempts;
• Defensive Rebound %;
• Fouls – We don’t want to foul.
o 80-20 Rule – We use the same defensive principles 80% of the time, we leave 20% for adjustments.
o For Example: We don’t switch ball screens, we may need to make the adjustment during the game and start switching ball screens.
o DO WHAT WE DO!

CLOSE OUTS
Start every practice with close outs:
o Big step, we want to cover ground – Chop your feet, while chopping feet your butt goes down and your hands go up.
o Hands ! Elbows bent (makes it easier to get hands to passes, dribble and shot).
o One hand challenges shot.
o The distance the defender should be from the shooter = Reach out & touch him.
The defenders hand should not go past his opponent’s body; this is how defense fouls (too close to offensive player). Every player will have different distances due to his or her arm length.
o If CONTACT is made = Hands UP & OUT

ON FAKES:
o Back foot leads the way – JUMP BACK.
o Fake = Chop back, when ball is brought back to shooting position = Chop forward. Arms
are active at all times.
o We don’t get beat to the outside of our defense (baseline drive in this case)
= CARDINAL SIN.

DRILL
Vegas Closeouts
• Lines start on the baseline. (Can have managers, coaches, other players at three spots around the three point line)
• First in line step out – Pass to the coach.
• Close out – Using our closeout rules.

Progression:
• Bring it back to one line.
• Have player on wing – Coach at the point.
• Defender works from “GAP” position to Closeout. 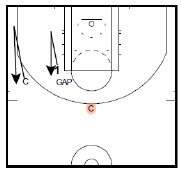 Progression:
• Can have Wing player cut up and down the sideline – Making the defender have to move.
• Defender needs to continue to see MAN & BALL, and adjust his/her defense when the ball is in the air.

BALLSCREENS
o We believe in keeping it simple with the way we defend our ballscreens.
o It can become confusing for a player trying to remember how to defend ball screens. An athlete can get lost trying to remember how to defend middle, wing, step up screens and remembering what defense is needed with each player; over, under, double or switch.
o We DO NOT go UNDER the ball screen unless it’s a STEP UP SCREEN. (Remember good teams are vulnerable to good teams shooting high 3FG %).
o THE FUNNEL.
If a screen is inside the funnel – Go back to your own man.

Keys
1. We want to be tough on the ball. Most important when defending the ballscreen.
2. We don’t need to bully through the ballscreen – It never ends well (FOULS). Don’t get hit & chase the ball handler.
3. Screener Defender – LOUD, EARLY & CONTINOUS.
The athlete needs to call the screen loudly, needs to be called early, and needs to continuously communicate that the screen is coming.
4. All 5 guys on the court help defend the ballscreen ! You see a ballscreen, sprint to it.

“JUMP”
o Vs. Pick & Pop
o We jump side ballscreens or a middle screen by a shooter.
o It allows us get back to a shooter quicker.

SCREENER’S DEFENDER
o Is loud, early & continuous. Call “JUMP, JUMP, JUMP”
o Match screener’s feet (VERY IMPORTANT).
The wrong angle of defenders feet can result in offensive player splitting the screen, or penetrating right past defender to the basket.
o “JUMP” = Take a big step out (Remember we are matching the screener’s feet) and then slide with high hands (No direct penetrations to the basket).
o Mindset – I am not fouling.

ON BALL DEFENDER:
o Tough on the ball
o No baseline drives.
o Go over the screen and under your teammate. (Very important) 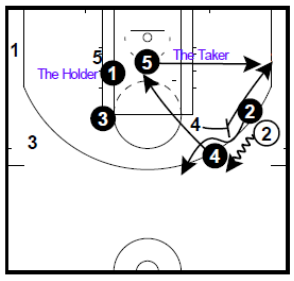 IF SCREENER IS A SHOOTER:
o “X” Action.
o When guarding a ball screen the low man (in this case the 5) and the screener’s defender (in this case the 4) switch the men they are guarding. The bottom defender must be verbal and tell the man guarding the ballscreen where to go.
o The player X-ing out is the “The Taker”.
o The GUARD helping the posts by staying in front
of the opposite post is “The Holder”.
o The Screeners defender needs to sprint back as quickly as possible and defend the post (Defend the post by your ‘rules – ¾ front, full front etc.).

“PLUG”
o Vs. Roller
o We plug screens that are set in the middle of the floor
Ash Arnott
o It allows the defender to get back to the roller quicker.
SCREENER’S DEFENDER
o The defender who “PLUGS” is in a boxer’s stance – Outside foot and hand up – Active.
o Doesn’t let the roller get below him. (Kaleb Tarczewski did a great job for us).
o Match the screener’s feet.
o Stop the ball – Your job is to contain and wait till the guard can get back to man, then you worry about your man.

You can read the rest of the post and download the notes and diagrams at this link: Sean Miller Arizona Defense