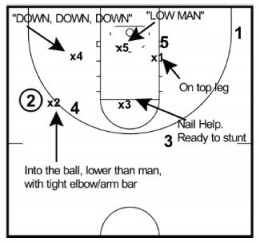 These are some of the notes on defending the pick and roll that Zak Boisvert posted on his Pick and Pop Basketball Coaches Site.

They are notes he took from Steve Clifford, Head Coach of the Charlotte Hornets.

Editor’s note from Brian. You won’t be able to use everything in these notes, but I hope you can pick up some terminology and a few teaching points that will help you defend the pick and roll

With shot clock change, things he would recommend to college coaches
1. ¾ court pressure
2. Down side pick & roll

To beat the best, we are going to have to be able to defend multiple pick & rolls in one possession. Our 4-men need to be able to do more than one coverage. We need to have that flexibility.

Regardless of the level you’re at, switch everything that you can. We start every shoot around with switching groups (“Who can switch versus these guys? 1-3? 1-4?”) We will switch every pick and roll that will not result in a significant matchup problem. “Anything you can switch, I would switch.”

We will start most games going under ball screens. We go under more ball screens than anyone in the NBA. With veteran players, you can manipulate ball screen coverages between different offensive players. Take advantage of
guys that aren’t range shooters. Going under will limit rotations and roll baskets.

Advantages of Downing Side Pick and Rolls

1. Keeps ball out of middle
2. Slows ball movement
3. Forces offense to execute at a higher level

-Pick & Roll defense starts with controlling the ball (can’t give up initial separation).

3 elements of Pick and Roll Defense

In our “Down” we are personnel driven and will adjust the distance how much the big guy comes out on the coverage. Al Jefferson drops, Marvin Williams will come all the way out to a step and a half off the ball. Let players play to their instincts and their strengths.

This big can’t give up dribble arounds. Can’t let the ball get to the baseline or to the middle of the floor. 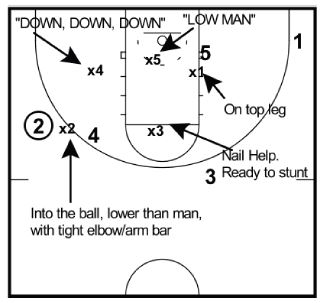 Your goal is to stay out of rotations as much as you can so you don’t spread out your defense more than you have to (remains compact) and limit how much you need to stunt. Exceptional on ball defenders will do this.

Talk to your “Low Man” about reading the roll. If there is no roll (like on a non-aggressive throwback to the screener), he can kick the weak side corner defender out (off the weak side big’s top leg/body) so the defense can stay organized and not be more spread than it has to.

On-ball defender: no middle stance already, I move into the ball with tight elbow, lower than the offensive player. Pursuit to get back in the play (as handler dribbles away). Activity level on the ball (disrupt/contest every pass—
over us or around us).

Screener’s man: varies depending on personnel how deep you are. On pass back to screener, we go inside/out to keep the ball out of the middle of the floor.

Nail defender: slightly inside the nail. The closer the screener pulls to the elbow, the more I am going to inch over (is also dependent on who he is). If the screener rolls, we’ll stand him up with a bump and force him down to
the “Low Man.”

Limit your stunts early in the game. Make him make a couple and then we’ll get more aggressive. Since becoming a head coach, Clifford is much more conservative with his stunts from the nail defender. He will live with the screener hitting jumpers. If you over-stunt, you get burnt on the second side of the floor because you’re overextended.

When there’s a roll, we blitz.
• Why? Because the roll will suck in our defense.
• If we don’t have ball pressure in our blitz, the ball-handler will zip it
to the weak side of the court on us as we’re sucked in on the roll.
• Coverage hears “roll” by the nail defender, they blitz.

There can’t be a “Down” call without a “Low Man” call. There should never be a pick & roll run where there’s not
two calls (“Down”/”Low Man”). If not, you’ll give up baskets to the roll man. Even if it’s not the correct rotation/protection scheme, by having a low man you disallow the #1 basket that kills ball screen D: roll-man
layups. Even if it’s not perfect, if you get a low man, you give yourself a chance to rotate out of it (rather than giving up a roll man layup). No matter the defensive coverage, there needs to be a “Low Man.”

When your man cuts through to the weak side, you go through slowly and with vision of the ball.

Here is a link to the entire article and to download it as a pdf if you are interested.