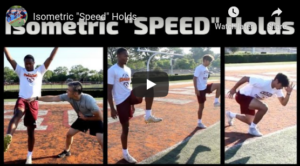 I’m always looking for ways to get my athletes to ⚡️Accelerate & Change Directions⚡️ better.

How many of us have those slow, stiff, athletes that can’t bend or move well? . ?‍♂️I know I work with a ton!

We’ve been implementing these ISOMETRIC “SPEED” holds before our dynamic warm up and I love the results.

The 3 and 4th drills focus on strengthening the Psoas / Hip Flexors.

Trying to give our guys the image of staying VERTICAL during their top-end speed drills.

Kids are moving, bending, and showing an increased range of motion!

The YouTube video below reviews coaching cues and mistakes to keep an eye out for when conducting the following Isometric Speed Holds:

The video reviews coaching cues and mistakes to keep an eye out for.

? Remember DOMINATE The Details, BETTER Your BEST, and ATTACK every set and rep!

This program will include ALL our linear speed progressions, advanced plyometrics, and cutting edge change of direction agilities!