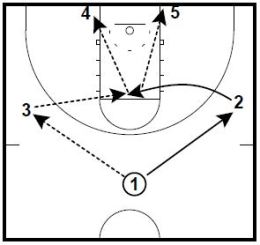 An idea that perhaps you can tweak and adapt parts of to your zone attack. 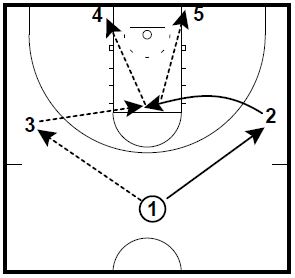 The 2 player will flash in from the weak side, looking for the quick jump shot in the paint.

The 2 player also has the option to pass to the 4 or 5 player for the lob layup. 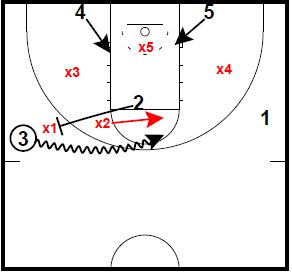 If the 2 player does not get the shot, he will continue to the wing to set a ball screen for the 3 player.

The ball screen will force the 2 defender help to stop the ball.

The 3 player will dribble the ball to the middle of the court.

The 4 and 5 players will step up to their block. 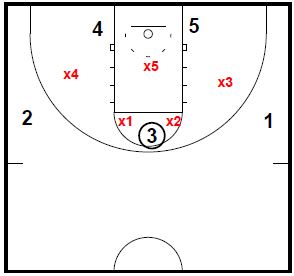 The 3 player will draw both X1 and X2 to the ball handler on the ball screen, forcing 2 defenders on the ball.

The offense can now play 4 on 3 against the defense. 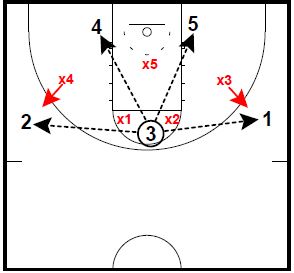 With the ball in the middle of the floor, the 3 player now has 4 passing options, looking to exploit the 3 backline defenders.

X3 and X4 will usually help big on the 1 and 2 players on the ballscreen action.

If they do help, the 3 player can hit either the 4 or 5 player on the block.

The X5 defender has to defend both players on the block. 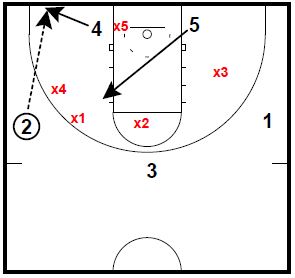 If the pass goes to the 2 player and the shot is not available, you can play short corner action. 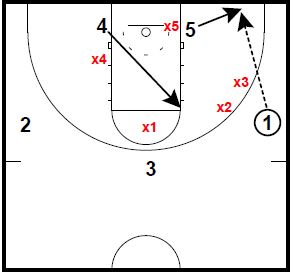 If the pass goes to the 1 player and the shot is not available, you can also play short corner action.