This drill is from Drew Hanlen of Pure Sweat Basketball. The drill is also posted in Fast Model Sports Basketball Drills and Plays Library.

This is a great competitive drill that works on defensive closeouts, catching drives, guarding the ball, getting chest stops, keeping the ball out of the paint, attacking closeouts and driving into the paint under control. I got this drill from my high school coach, Jay Blossom. 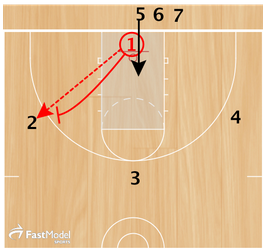 Player 1 passes the ball to Player 2 and then closes out under control.

Player 2 tries to drive the ball and get two feet into the paint using two dribbles or less. 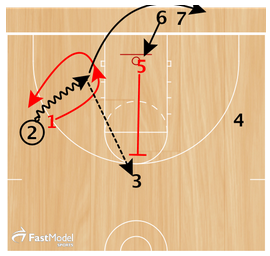 If Player 1 does not allow Player 2 to get two feet in the paint, they get a point.

If Player 2 successfully gets two feet in the paint, they get a point.

Regardless who gets the point, Player 2 passes the ball to Player 3.

As the ball is in the air to Player 3, Player 5 (who is under the basket & ready to closeout) will closeout on Player 3 to continue the drill. 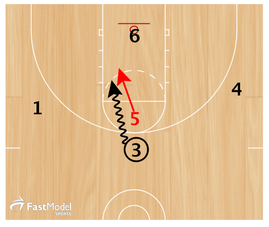 If there is a disagreement who earned a point, the coach will reward the point to the correct player.

You need one ball. There will be no shots taken throughout the entire drill. Each player will keep track of their own score. Game is to 10 points.

Variation of this Drill: You can also have a coach yell out which player the driver has to pass the ball to so that the defender under the rim can’t cheat the drill and has to be ready to closeout and react to either of the other two offensive players.