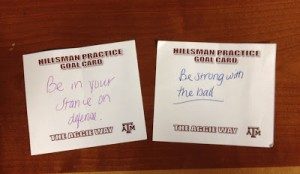 I have always felt that it is also important to add as much variety as possible to help players stay focused.  Additionally, I feel that our players have the responsibility to push themselves to get the most out of practice, but as coaches, it is our number one job to make sure that we are creating practices that are as engaging as we can make them for our players.

Even if you already do the things listed in this post, I hope you take some time to think about how you can make those segments even better in contributing to the improvement of your players as individuals and to your team as a whole.

This post contains practice ideas from Texas A&M Women’s Assistant Bob Starkey. His Hoop Thoughts Blog should be on your regular reading..

The following is a great passage from the book “Toughness” written by Jay Bilas which speaks to the mindset of a player in regard to practice.

A key question for us as coaches is how can we help our players with this process? There are several things that have served me well and here are a few. 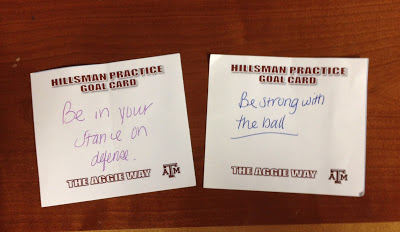 Something I started last here with our freshman post player Khaalia Hillsman was to have an individual practice goal.  I created some cards for her and placed them in her locker.  Each day she has to pick something that she wants to give extra concentrated effort on.  I let her pick it…she writes it down…she gives it to me when she first comes to practice.  I then make sure I am watching her to see how she is doing.  I compliment her when she is successful and remind her when she falls short about her goal.  After practice, I give her a grade on her goal and from time to time support that grade with video.

This is a short period at the beginning to do position work.  It’s also quality time between a coach a small, select group of players.  I was even more impressed to find out that it was done on a daily basis each practice of the season — all the way to the completion of the year. As a coach, you can set the tone in terms of what needs to be accomplished as a player and a team for this particular day.

Simply stated, it is a period of time before practice where you work on parts of the game that can sometimes be overlooked once the season begins and you are preparing for an opponent.  The majority of the time we break our team up into post and perimeter players and work on specific areas in relation to their positions.  I’ve been on staffs that have broke the group up into 3’s when space permitted.  At times, we will have half perimeter and post on each end when we want to work on areas that incorporate them both.

While we want focus and concentration in these areas, often it is a time where the coach might do a little more talking to explain and correct.  We can continue to work on fundamentals such as ball handling, passing, screening, dribbling and defense.  We can also work on a phase of the game that maybe we feel the need to improve upon from the previous game.  Possibly we did not do a good job of feeding the post so we can break it down in our pre-practice portion.  It could also be that we can focus on something of importance for an upcoming game.  If we are playing a team that drives the ball baseline from the wing well, we can look at are positioning and talk about and work on that fundamental.

I also like the opportunity to communicate with the players during this period.  We will spend a little more time explaining while also allowing the players to ask questions they may have.

While staff size can be a factor, I would have a Pre-Practice period even if I was the only coach.  Monday I would have the perimeter players come in early with Tuesday being for the post players, etc.

The length of time varies…generally pre-practice last between 15-30 minutes.  When we get into the meat of the season, especially in February, we will cut back on practice time but still have a pre-practice period.  Again, it makes sure that we never veer to far away from fundamentals and teaching.

EMPHASIS OF THE DAY

We believe this is a great way of focusing a team’s attention for a practice.  Picking a phase of basketball or an intangible and making that a special focus for that day.  We will have specific drills to highlight it as the “Emphasis of the Day.” It’s a simple way to make sure that your team improves in one area each day. That sounds simple, but think about it. If you could do something that would ensure that your team improves in one phase of the game each day, wouldn’t you jump at the chance?

Well, we’ve had that type of success with this concept and here is how it works.

First, you must pick what you want to emphasize each day in practice. We have a couple of schools of thought in this regard. The first is obvious—pick something that you struggled with the day before. Maybe on Monday your team didn’t do a good job of blocking out. So on Tuesday you make blocking out your emphasis of the day.

The second way of choosing an emphasis is to look at your upcoming opponent. Maybe the next team on your schedule does a nice job of running with the basketball. Your next practice might have transition defense as your emphasis of the day.

Choosing the emphasis of the day is just the beginning…now it’s time to start emphasizing! This comes from several different means and they all need to be a part of the process for it to be successful.

First, when the players come to practice, they will find a sheet of paper with the emphasis of the day in their locker. On the way out of the locker room they will see that same sheet of paper on the bulletin board. When they walk on to the practice floor, they will see it taped up at each basket and at the water cooler. There will be no doubt in their mind that the coaches are going to work diligently that day to improve that area.

We start each session with a “Pre-Practice.” In this segment, the team is broken down into smaller numbers for some individual attention and part-method teaching. Some of these drills will be devised to work on the days emphasis.

Following Pre-Practice, we will start regular practice by huddling up, at which time I will mention the emphasis of the day and why it is important. We will generally start practice with a drill that is specific to the emphasis of the day. Throughout practice, the coaching staff will constantly mention the emphasis in all drill work. The majority of the time, the emphasis will be related to a basketball fundamental: Blockout, Low Post Feeds, Shot Fake, Contest the Shot, etc. On occasion, it will be a mental emphasis: Concentration, Communicate, Listen, Intensity, etc.

If its going to be important, find a way to measure it.  We keep practice stats everyday.  We might keep a special stat on a specific day to compliment a particular emphasis — and we share it with our players…often in the middle of practice to let them know how they are doing.  Here is an older post about the topic of Practice Stats.